This is part two of a multi-part article about shifts, with special attention to how shot generation is related to where on the ice shifts start. In this part I'll introduce a quantitative adjustment for shot results based on shift start locations and we'll see that, at the season level, virtually no players see deployment that warrants discussion.

Previously, we saw how faceoffs were inadequate to describe shifts and how around half of all shifts start on-the-fly.In very broad strokes, where and how you start your shift is your coaches' decision; what you do with it is yours, including winning or losing faceoffs, breaking the puck out of your end or failing to do so, holding the puck in the offensive zone, or not; etc.

In the next (as-yet unpublished) article in the series, we'll look at individual game results and shift end locations as well as shift-start locations.

This suggests we are justified in treating all on-the-fly shifts as of one piece. The contest for the puck at the beginning of such shifts is immensely important, as the final image from part one shows. This also suggests a future work; namely, developing a way to predict with some decent accuracy the location of the next event following an on-the-fly shift.

Thus, we proceed by treating ``on-the-fly'' shifts as an entity to themselves. This chart shows the four shift types together, with the faceoff starts coded by zone. 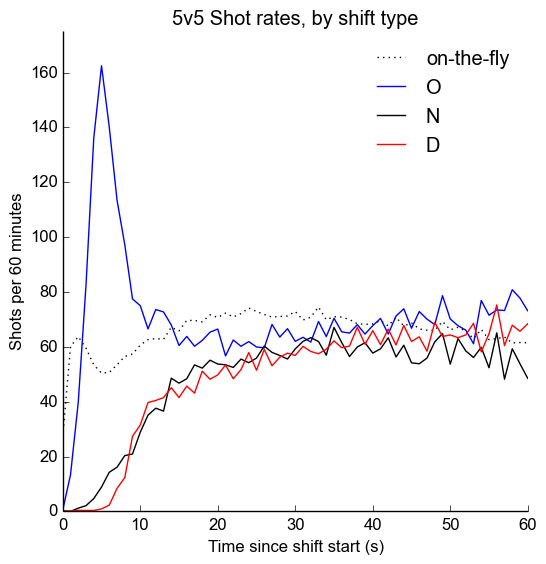 Compared to the faceoff shifts, the on-the-fly shifts have shots at very early times, as expected; what is somewhat more surprising is that they are persistently higher than the faceoff types in the region around twenty seconds after shift start. Nevertheless, after around thirty seconds, all shift types see broadly similar shot rates, clustering around 50-70 shots per sixty minutes.

So, if you start most of your shifts in the OZ, the shots your team generates will count for less and the shots they allow will count for more, to account for the head-start you were given by your coach. For each event at 5v5, there are ten skaters, not all of which started their shifts in the same place or at the same time. To get a value for each shot, we average the ten corresponding coefficients.

A more subtle adjustment method would compute adjustment coefficients for each second of each shift type, it is possible that this is an avenue worth pursuing. In the interests of simplicity, I do not do so here.

Using the above coefficients, let's look at the 2014-2015 NHL season to see who moves and by how much. First of all, let's look at the five players with the largest adjustment in on-ice shot percentage among all those who played at least 100 minutes at 5v5. 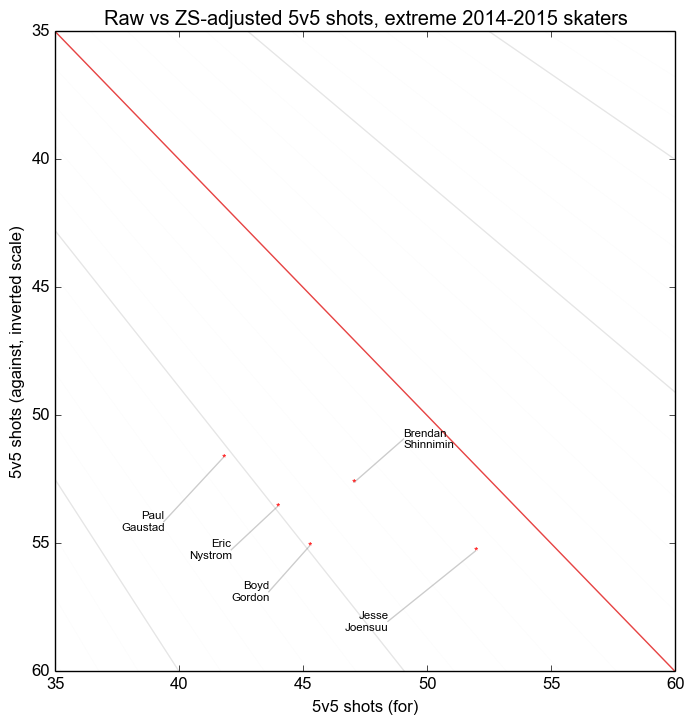 It is this kind of extreme deployment that generates the biggest shifts in the league. The enormous bulk of players do not see this kind of deployment, and measures based on (some) faceoffs hugely exaggerate which players are actually being deployed by their coaches in "heavily" defensive of offensive roles. Some players are routinely discussed as if their supposedly "extreme" deployment might explain their results, some players are reverently described as "buried" while others are, derisively, "sheltered". Let's look at four such players; Henrik Sedin and Erik Karlsson (supposedly sheltered) and Marcus Kruger and Manny Malhotra (notionally buried), repeating Paul Gaustad from the previous chart for scale. 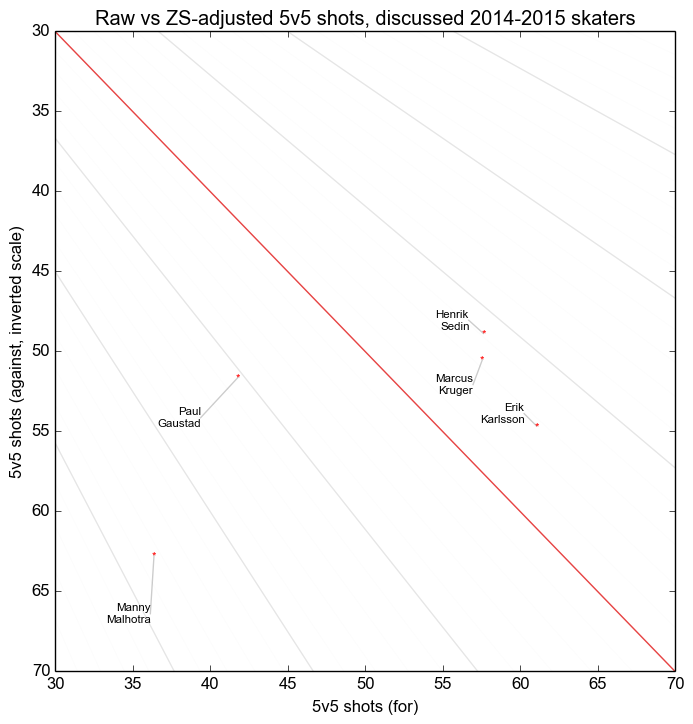 For Kruger there is a discernible effect of defensive deployment, in fact it accounts for just over one percentage point of movement in his shot percentage. For Malhotra there is a marked effect in shots against but none to speak of in shots for; we see that, even after accounting for his deployment he bleeds shots against heavily. On the other hand, both Henrik Sedin and Erik Karlsson show no movement whatever in shot percentage, shifting slightly towards the "high-event" scale. Their shot results are neither inflated nor deflated by their deployment.

Of all the players in the league in 2014-2015 with 100 minutes played at 5v5, only 5% of them them see their on-ice shot percentage move more than one percentage point; they are highlighted below in blue. 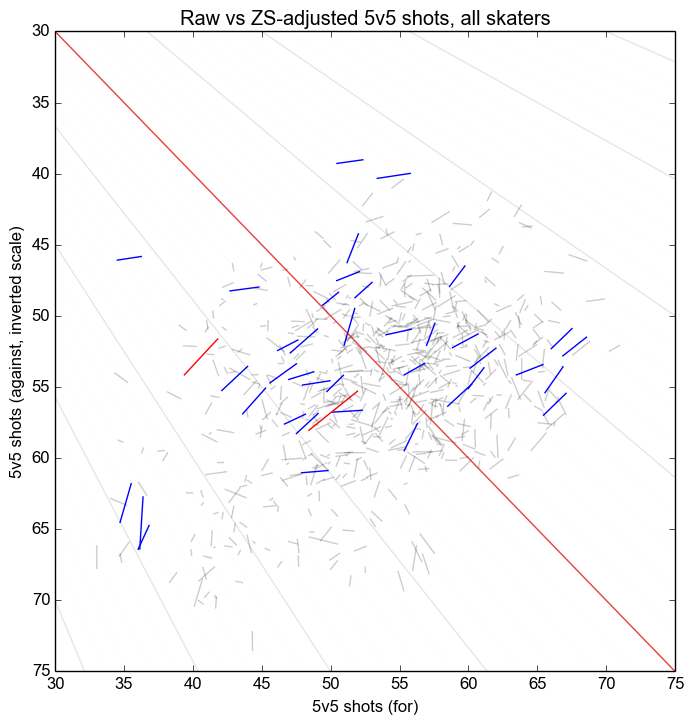 Only two players (Joensuu and Gaustad) move more than two percentage points, they are shown in red. At season scales, for almost every regular player, zone starts don't matter.