This is the first part of a multi-part series about shifts. Specifically, where in shifts do shots, misses, saves, and goals fall, and how does this relate to where the shift started and where it ended? Among other things, we'll look at shifts that start with faceoffs as well as shifts that start on-the-fly; as much as possible we'll try to isolate both the start and the end zone location of shifts. Over the course of the series we should be able to answer:

First of all, some definitions: A shift for a player is the total time from when they set skate on the ice until they leave the ice; usually they will return to the bench but sometimes they will go to the dressing room or to the penalty box. Many faceoffs occur at the beginning of a shift for some or all players but also many faceoffs occur in the middle of shifts. Shifts with timeouts inside them are still single shifts for many of the players. Shifts can never begin for players whose teams have just iced the puck, except for players replacing injured mates.

First of all, how long are shifts? More to the point, how much of the game is spent in shifts of each length? Here is the data for 2014-2015. 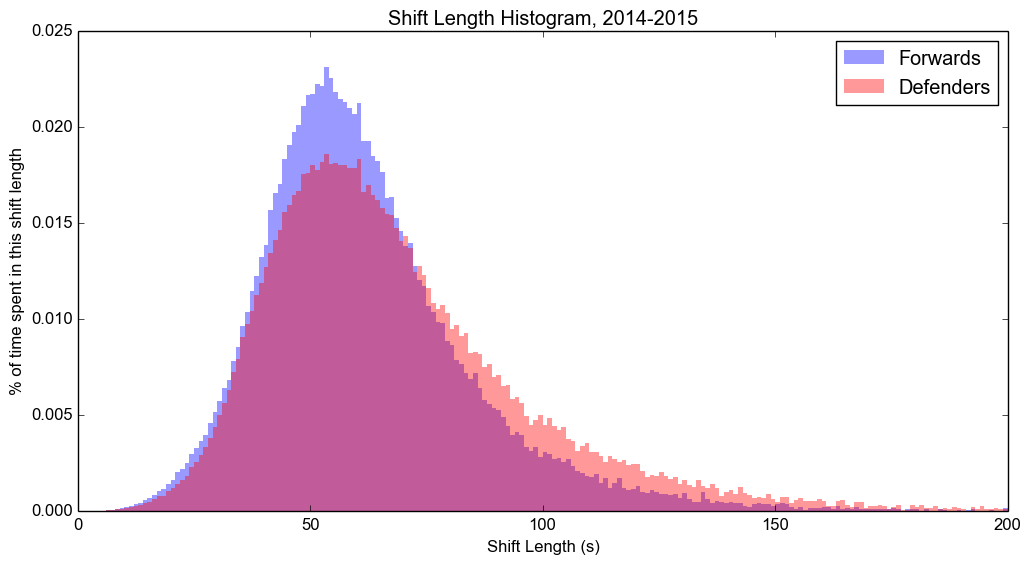 The above histogram shows shifts to the nearest second. The most common shift length, weighted by length, is 53 seconds, both for forwards and defenders. Although there is a clear skew due to a handful of long shifts, ice-time is fairly evenly distributed around the peak.

First, and most importantly: most shifts are on-the-fly shifts. In 2014-2015 there were roughly a million shifts, of which 57% were started on-the-fly. The on-the-fly shifts are very slightly longer, accounting for 58% of all hockey that was played last year. Clearly, any analysis of shift starts that doesn't take on-the-fly starts into account will be woefully incomplete.

One reason why shift starts are interesting is that they're sometimes used to (partially) explain especially good or especially bad results from individual players. Certain players are well known as "sheltered", that is, largely given offensive zone faceoff starts, and others are known as "buried", that is, largely given defensive zone faceoff starts. We shall see that these effects are generally overstated, and that in any given year only a handful of players can be said to have markedly atypical deployments. This confirms work of Matt Cane, who recently wrote an excellent two part series (part one and part two) with largely the same findings as presented here.

Coaches have as much free choice when they choose who will start the next shift for on-the-fly shifts as they do for faceoffs, so they are correctly thought of as part of a players deployment. On the other hand, faceoffs which occur in the middle of shifts should not generally be thought of as "re-deployments" of the people who remain on the ice. For the majority of such faceoffs the coaches do not have the free choice of all possible replacements, since the previous line has only very recently come off the ice. Furthermore, the very-close-to-normal distribution of overall weighted shift lengths strongly suggests that coaches' aggregated preferences are biased towards keeping shift lengths around 45 seconds; if they were (collectively) aggressively seeking specific matchups with quick changes early in shifts, we would see a skew towards short lengths.

Shifts that start with Faceoffs

First, though, we look at shifts that start with faceoffs. We carefully do not divide our analysis into pieces according to who won these faceoffs; after all, the coaches cannot know whose team will win the faceoff when they send their players over the boards. First of all, let's look at the shot rates for the home team when they start in the various zones. We don't distinguish between faceoffs at centre-ice or any of the four offside dots, nor do we distinguish between left and right hand side faceoffs in the offensive zones. 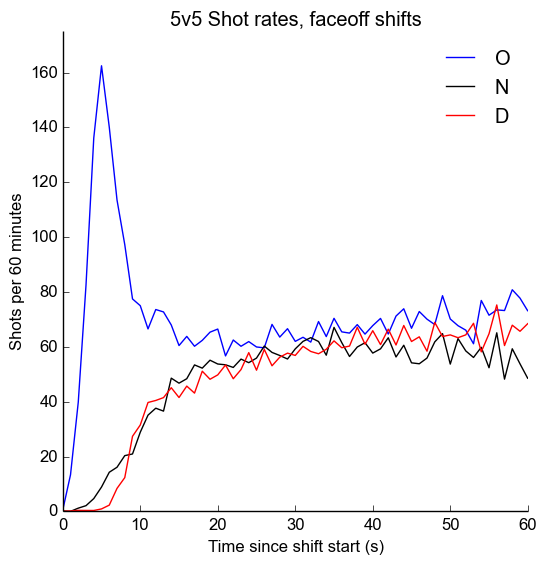 We restrict our attention to the first sixty seconds of shifts, and we only consider 5v5 events. The shots we measure here are all shots by the home team, that is, blocks, misses, saves, and goals; we do not adjust them in any way. As we would expect, all three rates begin at zero, since shots in the same second as a faceoff are extremely rare. The rapid onslaught of shots after offensive-zone faceoffs is to be expected, jumping quickly to around three times overall 5v5 average. However, it quickly settles down to "typical" pace, joining with the other two zones after around fifteen or twenty seconds. What is more interesting is that there is essentially no difference between neutral-zone or defensive-zone faceoffs; this curious asymmetry suggests that the two blue-lines are "farther apart" than they might appear. That is, these results suggest that defensive zone breakouts and gaining the offensive zone may be largely separate skills at the team level. This dovetails with the well-known but curiously not widespread fact that shot generation and shot suppression are only faintly correlated for individual players, about which another post in the future.

It is somewhat trickier to analyse on-the-fly shifts, in particular, we are stuck with the immediate question: where do they start? The puck can easily be shot from the red line to the far boards in under a second, so even if we had puck tracking capabilities we would not naively be able to simply mark on-the-fly shifts as happening "where the puck was" when a given player jumped over the boards. One thing we can do, however, is consider where the puck was before the shift change, and where it was after the change. We infer these locations approximately by looking at the location of the previous and following events in the play-by-play; where by event we mean any event, not just a shot. This gives nine different types of on-the-fly changes.

Not all of these nine shift types are equally common, though; the following table shows the breakdown:

For on-the-fly changes, we look back to the previous shift also to see if we can glean some more information. 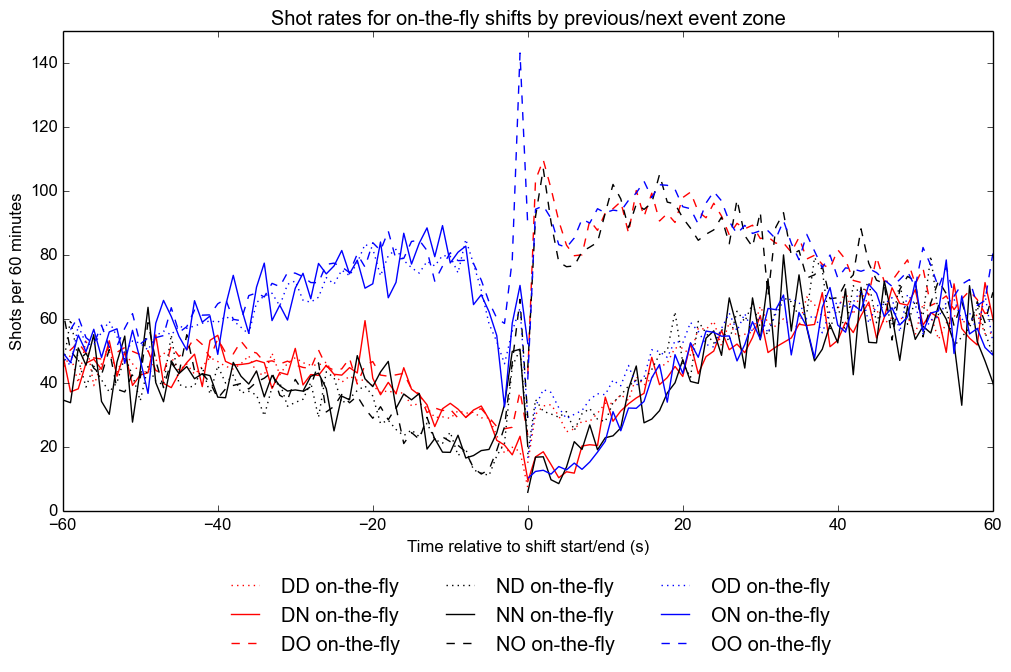 To the left of zero, before the change, the lines are strongly grouped according to colour; to the right, they are strongly grouped by line style. This strong grouping is itself remarkable. Furthermore, although all of the lines coalesce far away from the shift change, as was the case with faceoffs, they take much longer to do so; around thirty to forty seconds looking forwards and slightly longer still looking backwards. This marked separation suggests several things. Most obviously: the previous location of the puck is a very weak indicator of where it will next be found when a shift change is happening; moreover, the location of a puck shortly after an on-the-fly change is an even weaker predictor of where it was just before the change. This suggests that on-the-fly changes cannot be sharply localized and should not be thought of as being in a given zone. They are their own creature; they cannot be ignored or subsumed into neutral zone starts, as some have argued. Even more interestingly, the separation shows that, like a faceoff, the first few seconds after an on-the-fly change are vitally important, and winning this particular puck battle is the difference between a shift with many shots in it (the dashed lines) and a shift spent almost entirely defending (the dotted and solid lines).

Of secondary interest, but curious, most of the lines show pronounced jumps in shot rates just before the shift change; this is likely because most shots relinquish possession of the puck and those which do not result in faceoffs (goals and some saves) will, if the time is right, lead to a change on the fly.

In closing, I record here some other patterns which do not appear in this data. For instance, one might wonder if the away team has different results than the home team; they do not. Even more surprisingly, both of the above graphs are unchanged when restricting our attention to single periods; the much-ballyhoed "long change" of the second period cannot be detected at this level.