I simulated the 2019-2020 NHL regular season a million times to estimate what is likely to happen. (I used a computer to help me.) To estimate the probability of the home team winning each game I used my prediction model, Magnus 2 Curious readers will find lots of detail following the link, but, very briefly:

Using the isolated abilities of their players and their coach, I can form an estimate of how each team will peform "in a vaccum", that is, before considering the schedule of games which determined opponents and fatigue.

Subscribers to the site ($5 or higher) who are curious about how the individual player abilities combine to form the team abilities can check out breakdowns. 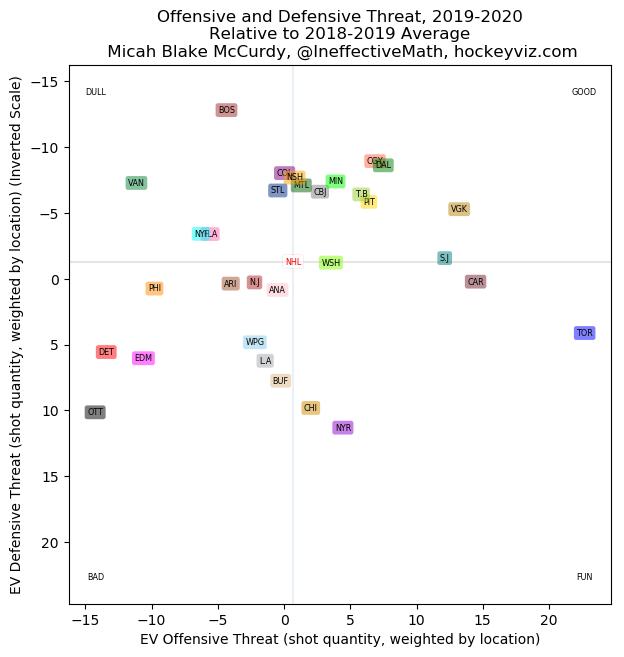 The most basic result in the sport is the shot. To win a team will shoot often and from dangerous locations and with some measure of shooting skill. First, I look at even-strength shot rates, weighted by historical shooting percentages from the given locations. This gives an idea of "total offence" or "total defence", before I consider shooting talent and goaltending talent. I call this estimate threat; think of it as a shot quantity measure where perimeter shots are counted as the low-danger things they should be. The zero point is set to what we saw in 2018-2019; if the league opens up it's possible for this year's average to be above zero (or below zero if the league becomes more defensive).

The Leafs are alone in generating volume of offence, though Carolina, Vegas, and San Jose are not far behind. Teams like Dallas and Toronto both have a similar net shot rate, but "fun" teams like Toronto are more insulated from randomness by their high volume.

Unsurprisingly, the Melynk-gutted Senators are expected to be clearly league-worst in shot rate, though the perennially hapless Oilers and the Red Wings are not far behind. For fun (that is, chaos) neutrals should perhaps consider the Rangers, who will be the league's weakest defensive team but have a number of exciting (offensive) players anyway which should make their games good watching. 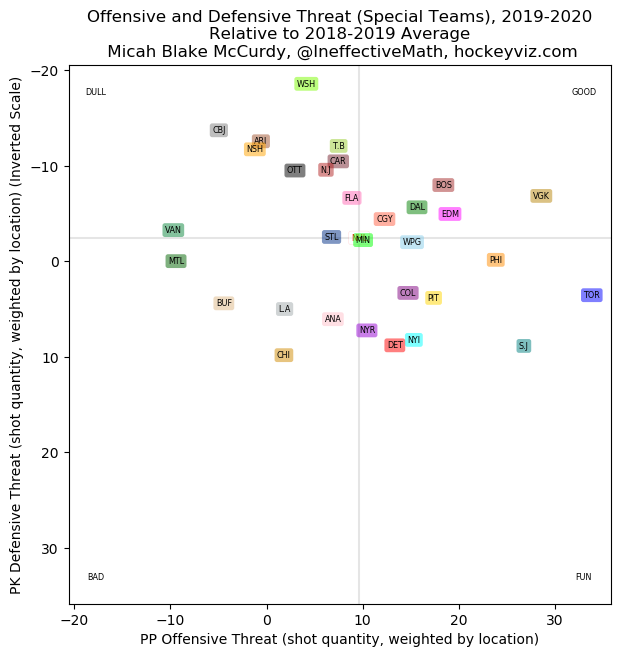 The same measurement above, but for special teams: power-play offence on the x-axis, and penalty-kill defence on the y-axis. (Power-play defence and penalty-kill offence do not especially interest me). This particular graph should be taken with a grain of salt; since the shooting-percentage-by-location weighting is carried out using historical even-strength goal probabilities, and in special teams play the assumption behind threat, namely, that location is the primary contributor to shot danger, is shakier. Still, I feel it is a better measure of shot quantity than simply counting unweighted shots.

The Toronto power-play is still the obvious standout, but I expect Washington's penalty-kill to also be extremely good, though the stalwarts there (Eller, Wilson (when not in the box himself), Hagelin, Hathaway) are not the sorts of stars that the Leafs' power-players are. The weakest teams on special teams (Vancouver, Montreal, Buffalo, Chicago, Los Angeles) are unusually isolated from the pack; perhaps we might see some assistant coaching shuffles early in the year. 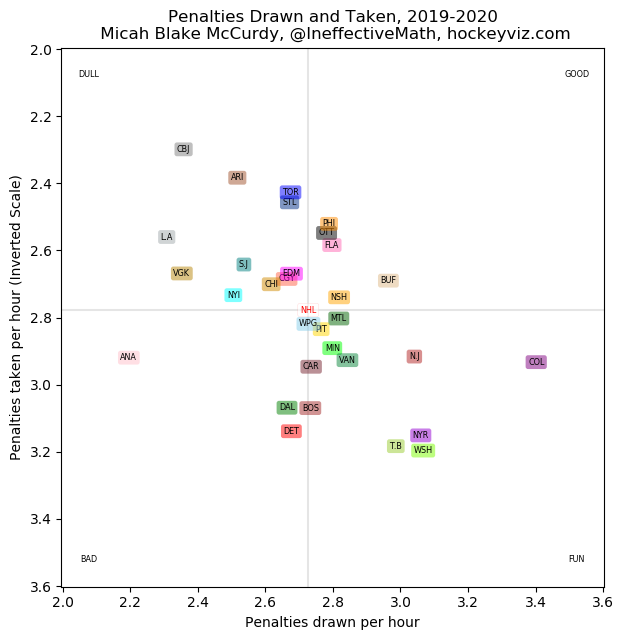 Expected penalty differentials for teams are computed from expected icetimes for each player, multiplied by individual tendencies to take or draw penalties. I suspect that Anaheim may, in fact, not be quite as low at the bottom of the league as shown here, if some of their previous penalties taken (ascribed to players solely) may have in fact been caused by their execrable now-departed coach. Purely as a matter of trivia it amuses me to see Colorado, expected to lead the league in power-play time, has had an abysmal pre-season on the power-play, scoring next to no goals in dozens of attempts. The Rangers appearing in the "fun" zone again suggests that bedlam in their games is especially likely. 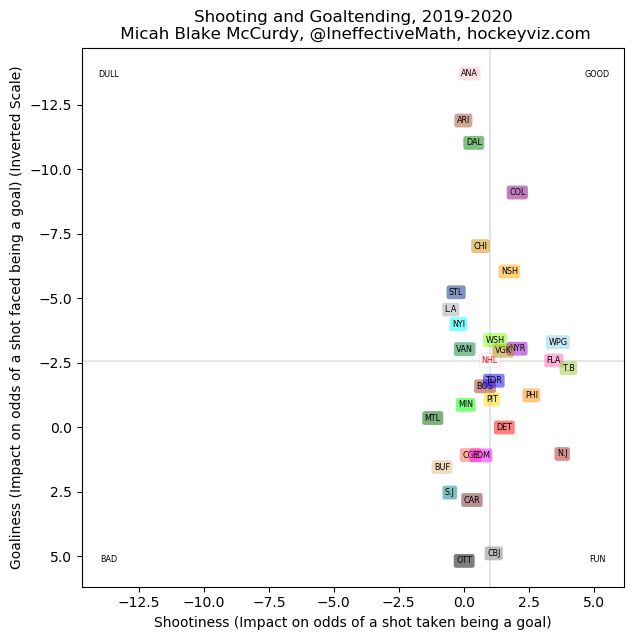 Of unusual importance in this year's model (also every other year) is the impact of goaltending, and, conversely, shooting talent. The coefficients for goaltender and shooter ability are not as easily interpretable as the previous measurements, but they can still be understood with odds ratios; for instance, the odds of a shot taken against Ottawa (with the league's worst regular goaltender returning to presumably start many games) becoming a goal are 5% higher than a similar shot taken against another team's goaltenders. In Anaheim, the high value is primarily due to John Gibson (the best goaltender in the league) unlike in Arizona and Dallas, where both goalies in the expected tandem are very strong.

All of the above is taken entirely from the team's roster and coach, without regard to the schedule. Of course, not every team has the same schedule, which affects how well they are likely to perform. 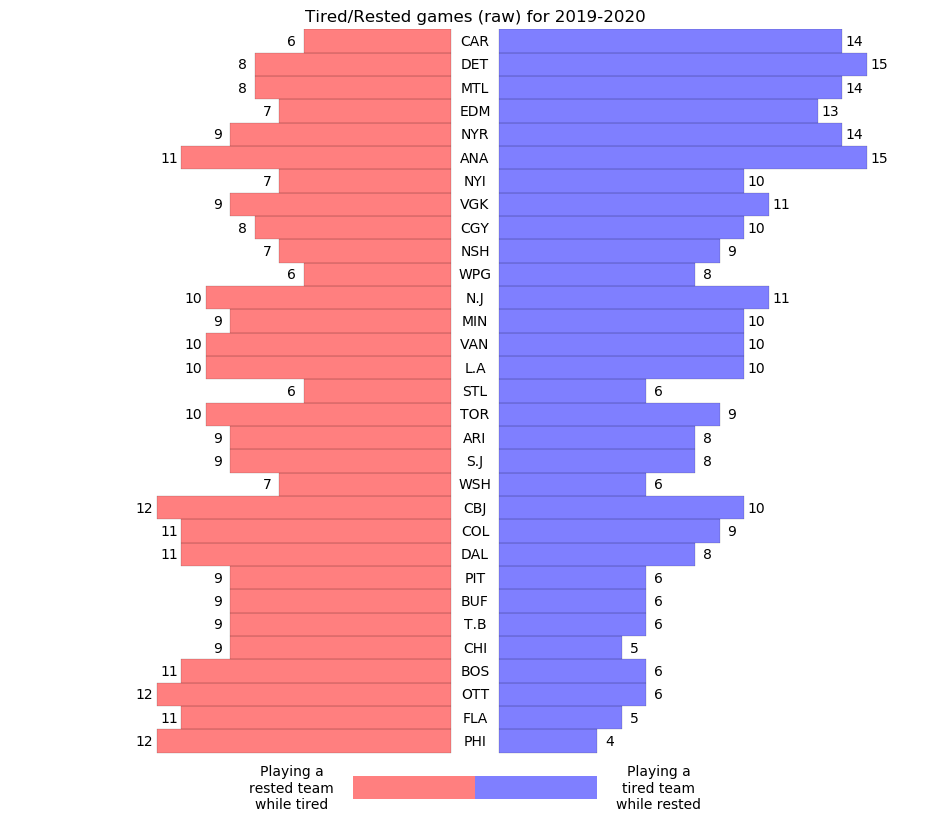 Not all teams are equally affected by fatigue. The strongest effects from rest are seen when teams play after playing the night before. The table below shows how many times each team plays 'tired' in this sense, as well as how many times they play against a team that is tired.

The most important factor of the schedule, though, is not rest but the fact that teams do not all play against the same opposition. To measure this, only simulation will suffice, the results of which are presented below. 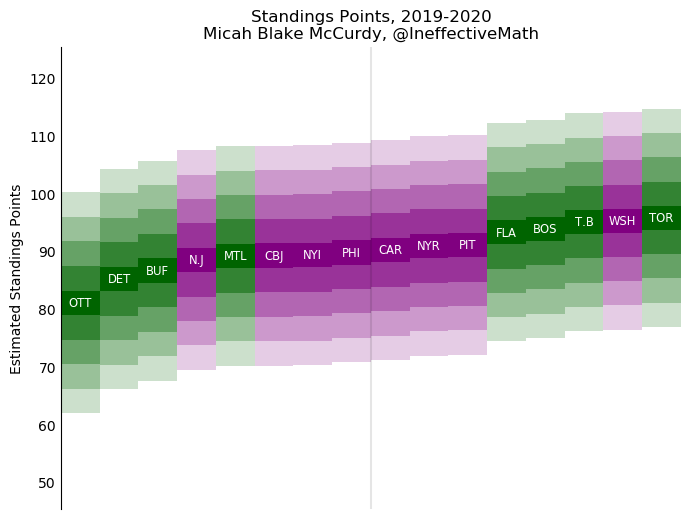 Thus, for instance, there is a 20% chance that the Blue Jackets finish with between 87.2 and 91.2 points; the two adjacent boxes each represent a chance 17%, the next two 12% each, the next two 7% each, and the extreme pair 4% each. The darknesses of the boxes are chosen to reflect these probabilities.

Thus, I expect around six of the teams to finish in the darkest box, around ten to fall into the adjacent boxes, around seven to fall into the next pair of boxes, around four into the next pair, and one or two teams to fall into the faintest boxes. These one or two teams, which I make no attempt to predict ahead of time, will be much discussed. The proximate cause of their success or failure will doubtless be a superhuman goaltending performance, like Carey Price in 2014-2015, or a horrific cavalcade of injuries, like Columbus in 2014-2015, or an exuberance of last-minute goals and hot shooting, like Calgary in 2014-2015. Part of why I make predictive models is that I enjoy knowing just how unlikely are the various unlikely things that happen every year.

The Atlantic teams are shown in green and the Metropolitan teams in purple. With a few exceptions the really weak and really strong teams are all in the Atlantic, just like last year. 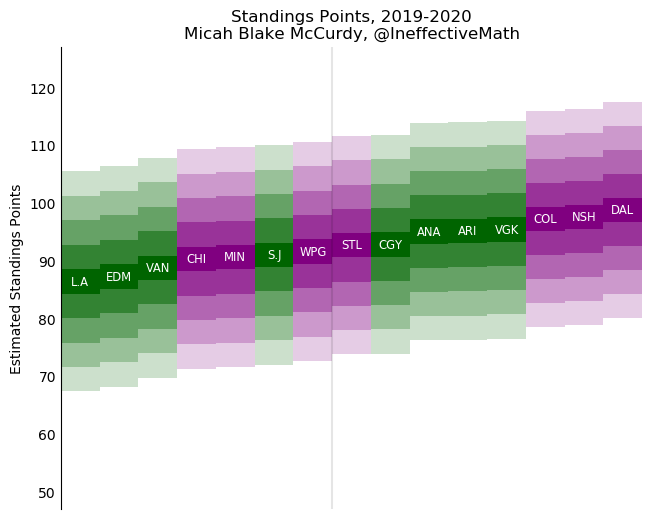 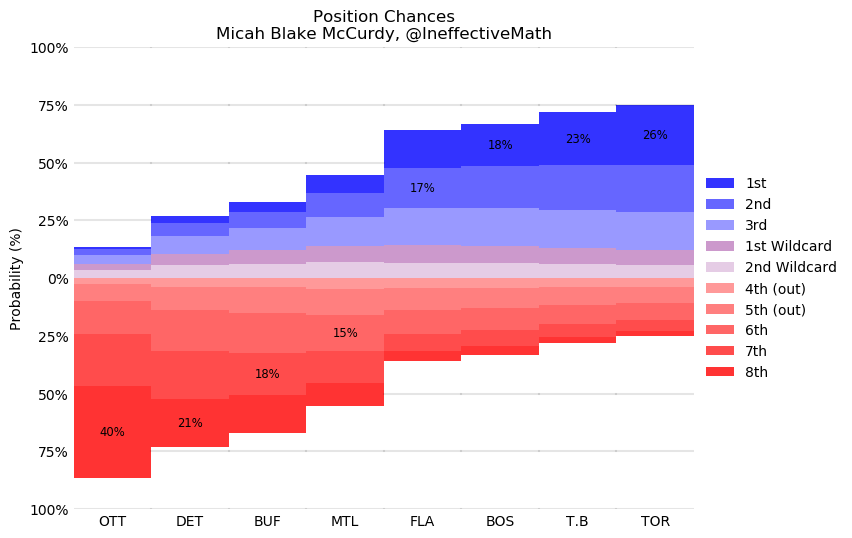 Every team's most likely finishing position is marked---all three of Toronto, Tampa Bay, and Boston Bay are more likely to finish first in the Atlantic than in any other particular position, which is another way of seeing just how tight the top of the division is. Overall, there's a fairly clear split between the top four "haves" and the bottom four "have nots", with Ottawa especially weak, having traded away all of their best players and seeming determined to start mediocre-to-dreadful goaltenders for most or all games. Toronto will have some semi-serious defensive weaknesses but should have more than enough offensive firepower to out-score their problems. 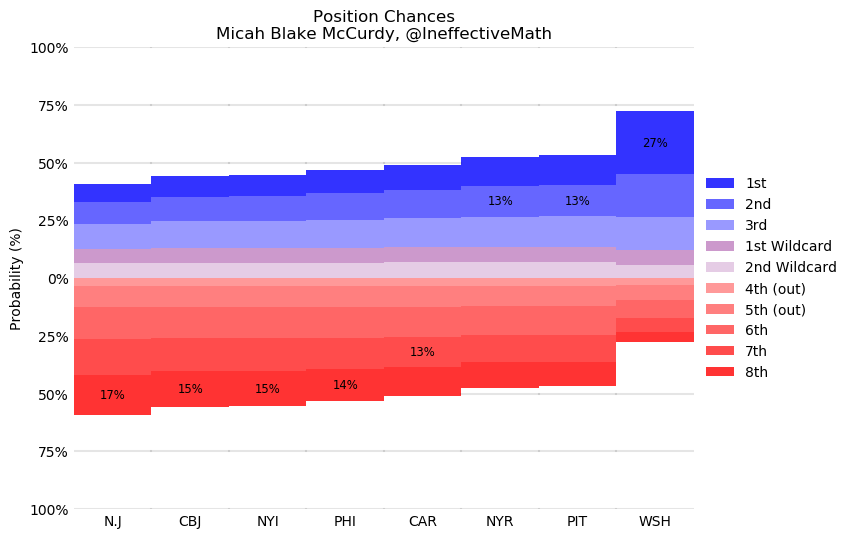 The Metropolitan division, with the exception of Washington, is almost ludicrously well-balanced. Collectively, the Metro will struggle because so many of them must play against one another, with considerably fewer games against the weak Atlantic teams (relative to how many times the strong Atlantic teams get to play them). This makes a 5-atlantic-3-metropolitan playoffs more likely than usual, which hurts all of the metro. The Capitals 5v5 shot volume play remains weak as before but considerably above average abilities in net, in shooting talent, on the power-play, and on the penalty kill puts them well above the division, even as some of their better players age.

New Jersey is an especially curious team since so I expect a lot of their minutes to be played by three forwards who have never played in the league, namely Jack Hughes, Jesper Boqvist, and Nikita Gusev. I expect them to have the lethal finishing talent that will win some games and look dominant in places but not the shot volume that permits sustained success. 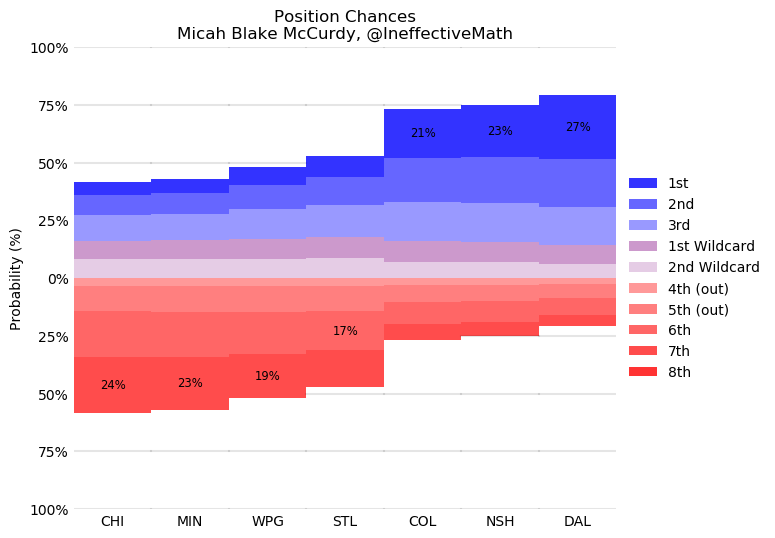 Like the Atlantic, the Central divides neatly into "haves" and "have nots". Dallas in particular have one of the better team defences in the league as well as one of the best goaltending tandems; Colorado's success is built more off their already-excellent forward group which they improved substantially by adding Nazem Kadri this summer. (Note: this assumes that Rantanen will miss no time; as of this writing he is still without a contract.) Winnipeg downgraded their defence this summer, their brief "window" may already have closed. 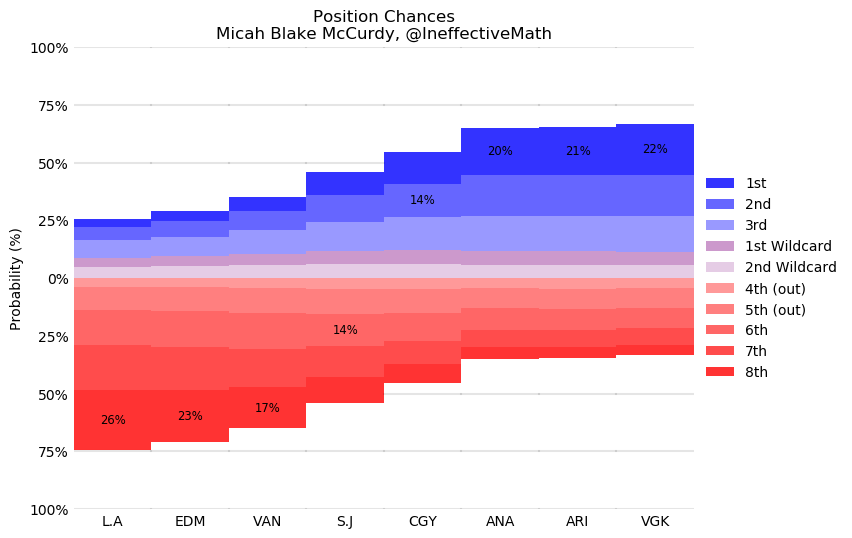 Vegas with the best chance of finishing first should surprise no one, with all of their major pieces still in place from past years and expecting a full year of Mark Stone. Somewhat more surprising are the positions of Arizona and Anaheim, both of whom have excellent goaltenders, which should win them a lot of games, although in a somewhat more fragile way than teams built on skater talent. In Anaheim's case there is an extra boost from their substantially improvement at the head coach position. San Jose may well overperform their projection here if they upgrade at goal, which I expect them to do if their tandem performs at their talent level. Then again, I expected them to do this last season also and they stubbornly did not.

Show your derrière for Lafrenière.

Since the league still hasn't yet implemented Gold drafting (which guarantees 82 exciting games for fans of all teams, win or lose), many teams will once again play many games at the end of the year which they would rather lose. Although there will be many trades and confusions between now and the end of the year, these are the early probabilities (including all three lotteries) for who will get the 2020 first overall draft pick.

In addition to being the worst team in the league, the Senators hold their own pick as well as the Sharks' pick this season, this gives them the best odds in the league at first overall.