I simulated the 2017-2018 NHL seasons a hundred thousand times to estimate what is likely to happen. First, I simulated each game ten thousand times using Edgar, my predictive model for single games. Briefly, I consider shot generation, shot suppression, shooting and goaltending results, which players are more likely to take the shots that are taken, special teams, penalties drawn and taken, rest, and home ice advantage. Injuries, suspensions, and all off-season moves are included.

Although the single-game model is new, the overall method I used is strongly similar to the one I used last year, with some key improvements; some of the explanation is copied from last year's preview. I especially thank Hannah Stuart for estimates for several prospects (namely, Barzal, Boeser, Chabot, DeBrincat, Fischer, Hischier, Jost, Keller, McAvoy, Milano, Patrick, Sergachev, Strome, and White) who are likely to play substantial minutes this year; her estimates of their performances are doubtless much better than mine would have been. 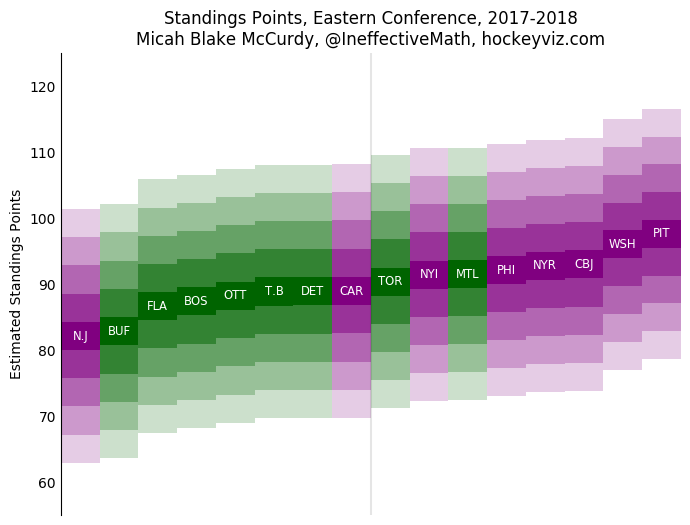 Thus, for instance, there is a 20% chance that Toronto finishes with between 88.4 and 92.7 points; the two adjacent boxes each represent a chance 17%, the next two 12% each, the next two 7% each, and the extreme pair 4% each. The darknesses of the boxes are chosen to reflect these probabilities.

In total, I expect around six of the teams to finish in the darkest box, around ten to fall into the adjacent boxes, around seven to fall into the next pair of boxes, around four into the next pair, and one or two teams to fall into the faintest boxes or beyond. These one or two teams, which I make no attempt to predict ahead of time, will be much discussed. The proximate cause of their success or failure will doubtless be a superhuman goaltending performance, or a horrific cavalcade of injuries, or an exuberance of last-minute goals and hot shooting. Part of why I make predictive models is that I enjoy knowing just how unlikely are the various unlikely things that happen every year.

In the east this season, the enormous imbalance of strength between the two divisions will be a persistent storyline, almost certainly the "third atlantic" seed will be a team outside of the conference's best eight, to the vexation of purists. It is similarly likely that the Atlantic division winner may get two rounds of home-ice advantage despite finishing in the bottom half of the conference.

Playoff cutoffs: 92.3 in the Metropolitan, 89.7 in the Atlantic. The Metro is the hardest division to qualify from this season. (These are calculated according to this article.) 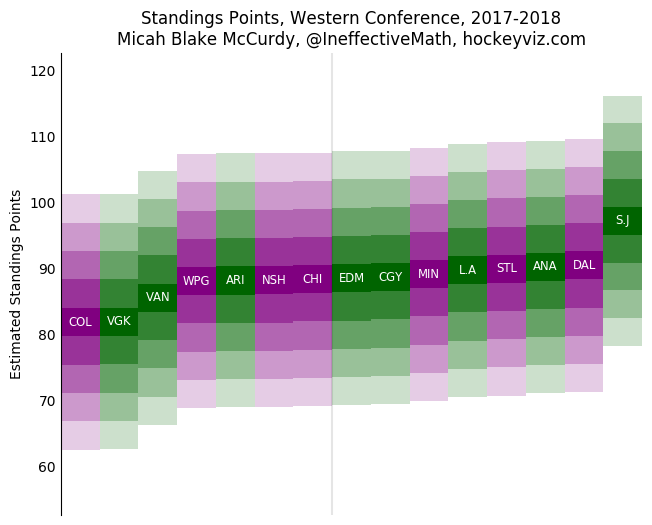 The west is full of gridlock, as is typical of the NHL today, but with a handful of clear distinctions. The Sharks benefit from a strong all-around team with no substantial weaknesses and a very generous schedule, playing two of the weakest teams in the conference many times. Vancouver should have an especially frustrating year, being nowhere close to the playoffs but also somewhat insulated from the very bottom of the barrel where the best draft picks marinate. The remaining teams I expect will cluster tightly for most of the year.

Playoff cutoffs: 89.0 in the Pacific, 88.3 in the Central. The Central is the easiest division this season, a big drop in overall strength from last season. 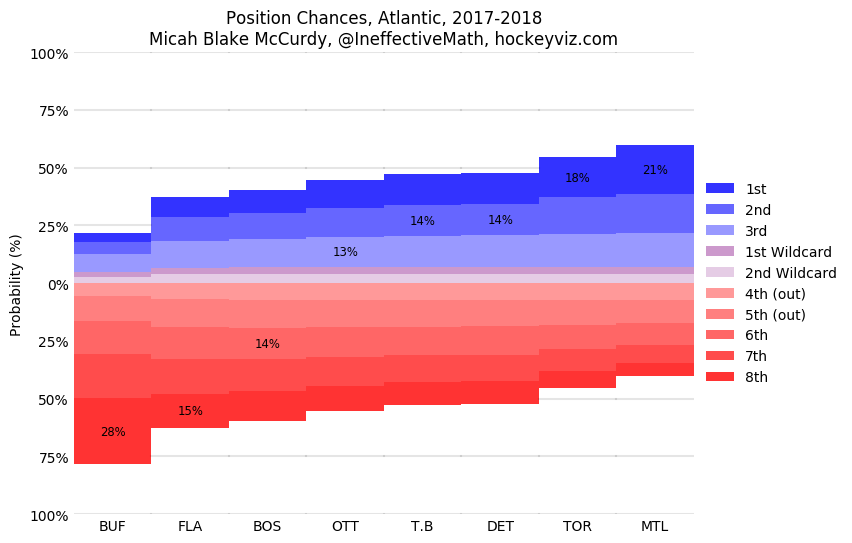 The most average of the divisions, the Atlantic is the trickiest to distinguish between teams. Most teams have low probabilities, suppressed by having to play Metro teams constantly. Montreal's defence remains very strong though their offence is weak; Toronto's offence (at 5v5 but especially on the power-play) remains strong though their defence is weak; they are likely to fight for the division which should please hidebound traditionalists and tv networks. The Sabres are improved but remain in the bottom of the division; many of their hopes to escape rely on a new coach whose impact is not considered by Edgar. Ottawa were extremely fortunate last year (that's part of why their run to within a goal of the Stanley Cup Finals was such good theatre) and are likely to regress severely but still remain near the playoff bubble where they have been for most of recent memory. Somewhat more surprising to me is Detroit also in this bubble; their 5v5 play is ordinary but their penalty differential and their special teams results should keep them in playoff races. 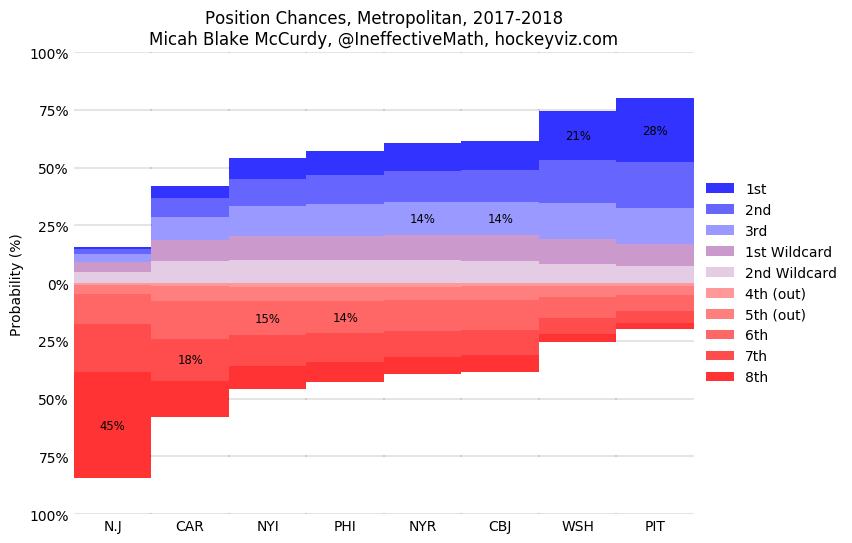 The Devils are improved somewhat from last season (especially by the addition of Nico Hischier) but the division improved around them just as much, leaving them chained to the basement, Carolina is in a similar but not-quite-as-dire spot. The Capitals are weakened but still very strong, whereas Pittsburgh is not obviously weaker from the team which won the cup last year. The Rangers replacing Girardi with Shattenkirk have upgraded substantially and young Columbus players should have no trouble replicating much of last years success though Bobrovsky is expected to regress somewhat. Some will be surprised by Philadelphia's relatively high position, but their special teams rates are expected to be near-league best and the addition of Nolan Patrick will help at 5v5 considerably. 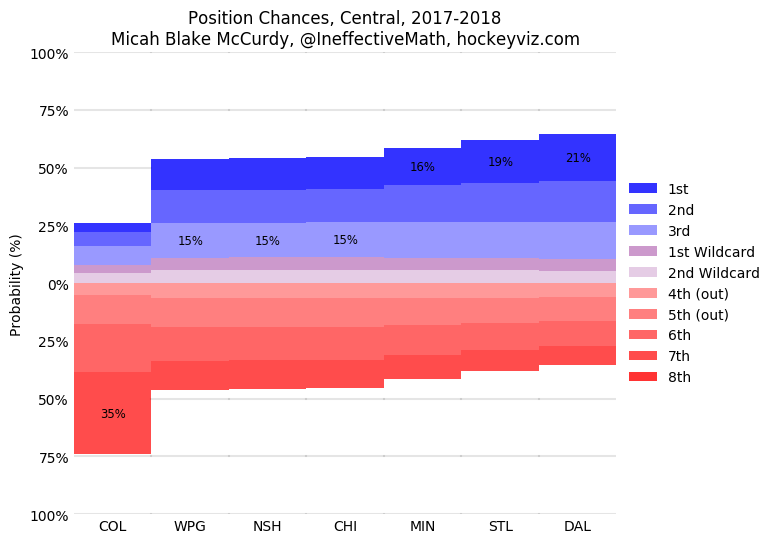 Colorado were very unlucky last season in addition to also being very weak and while their luck will surely improve the overall skill of the team is more or less unchanged. On the other hand, serious injuries and adding weak players who are likely to get lots of minutes drags Nashville back into the back. Winnipeg are hampered by weak expected special teams play, but nevertheless have a better-than 50% chance of making the playoffs, largely because of the lack of any very strong teams and also the profileration of weak Pacific teams. 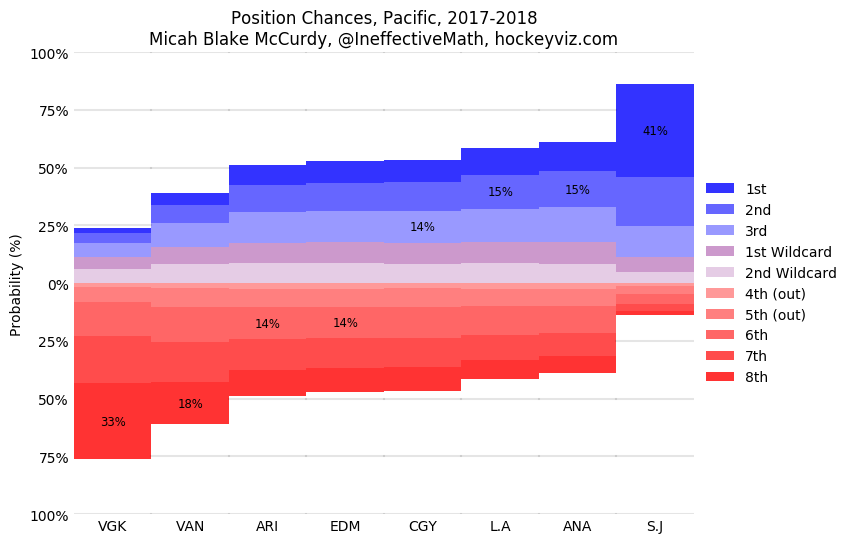 The Golden Knights could easily have been in the thick of things had they expansion drafted for immediate impact, but instead they chose to make many deals for picks and obtained the predictably weak roster they will ice for much of the season. Even with very generous assumptions for Shipachyov, I still expect them to be league-worst in overall goal rates, overall penalty differential, and overall special teams performance, dramatically so in the last case. Vancouver will also be notably weak, in a humdrum sort of way. Taking advantage of many favourable matchups (especially with VGK and VAN), I expect the Sharks to handily take the division. The remaining teams are very tightly bunched; the Kings remain in the pack with their extremely strong defence, the Coyotes are much-improved in the off-season. 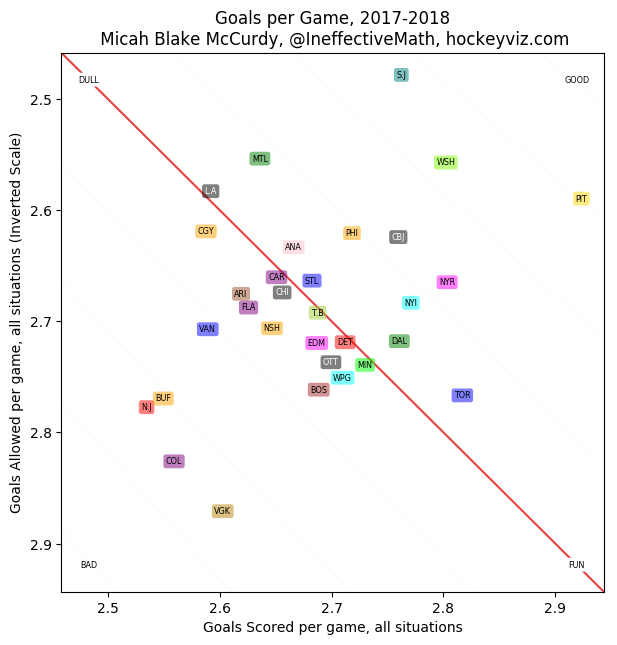 Considering all situations, there is one obvious "top" tier: Pittsburgh, primarily offensive, and San Jose, primarily defensive. Washington are slightly behind and more balanced. As always there is substantial clumping in the middle, but several pairs of teams make for stark contrasts; most obviously, Toronto and Montreal arrive at similar just-above-50% goal shares through very different approaches. The four weakest teams have similar goal differences but also show a variation of style. For an expansion team, which is for that reason expected to lose early and often, a bias towards more goals for both teams (that is, towards the quadrant marked "FUN") is probably no bad thing. 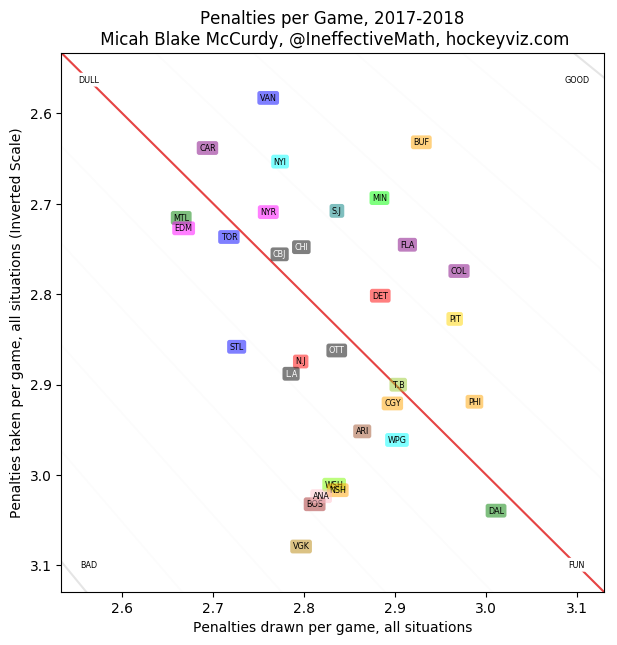 Special teams are rightly subordinated to even-strength play in analytics, but they still comprise around a fifth of the icetime and a fourth of the goals in the sport, on average, so penalty rates will have a substantial impact on a season's results. Vancouver and Buffalo are expected to take very few penalties (preferring to lose at 5v5) and Vegas is expected to take the most in the league. Dallas has many players who take and draw many non-offsetting minors, so they are expected to spend a lot of time on special teams, this is a wise strategy for them since their special teams play is generally strong (see next chart). 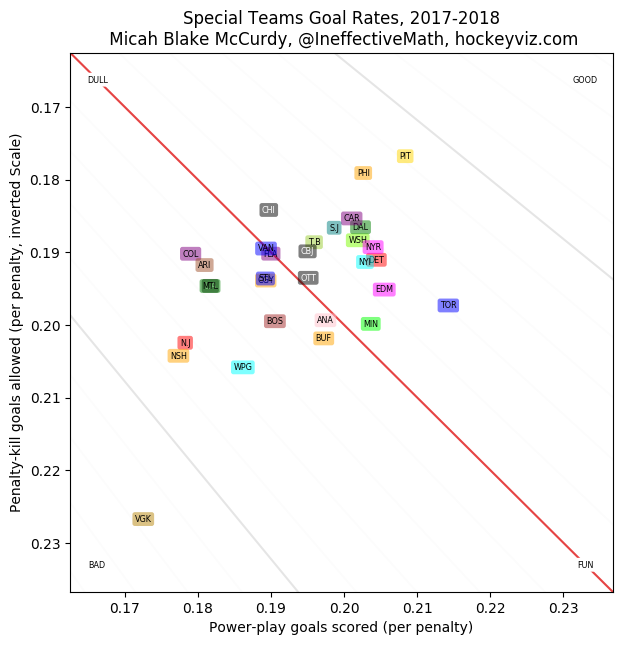 On special teams themselves, only a handful of teams stand out. In a good way, the Penguins and Flyers seem especially strong, most notably while short-handed. The very dangerous Toronto power-play will likely make some teams change their game plans specifically to try to avoid taking penalties. Winnipeg are likely to be sunk again by their poor penalty-killing, and the Knights' weakness will show very markedly on special teams. 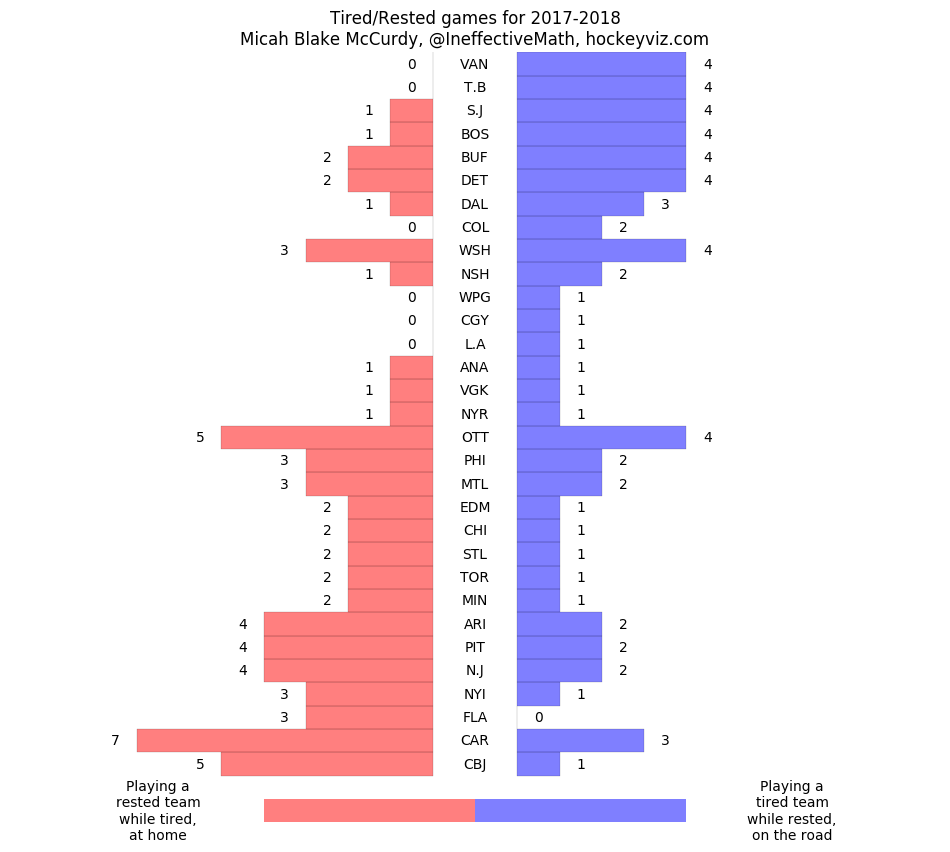 Not all teams are equally affected by rest. It's commonplace to highlight games where one team is playing tired (that is, after playing the night before) and the other team is not. However, in the past substantial deviations from typical home win percentages are seen only when the team playing at rest disadvantage is the home team---tired road teams don't seem to be seriously affected. When we restrict our attention to these games, we see that the variation of rest-affected games is not very large. Benefits are not confined to teams in a particular area of the continent. The starkest bit of scheduling is Carolina, who must play at home while tired (essentially, giving home ice advantage to their opponent) seven times while only receiving a matching benefit in another game three times. They play, in essence, 37 home games and 45 road games.

Since the league hasn't yet implemented Gold drafting, many teams will once again play many games at the end of the year which they would rather lose. Although there will be many trades and confusions between now and the end of the year, these are the early probabilities (including all three lotteries) for who will get the 2017 first overall draft pick.

The general weaknesses of Edgar are discussed at the end of the model description here but I outline here how those weaknesses may be relevant to this season. Roughly speaking, I give my own opinions here about where I feel the Edgar predictions may be wrong. Of course, I do not modify them in any way, that would be dishonest. As always, I strive for the best model (that is, balancing according to my professional judgment accuracy, interpretability, parsimoniousness, and efficiency), not seeking to be an oracle.

One weakness is the lack of coaching effects; it's natural for fans to expect that a new coach will be better than the previous one (after all, he is so easily blameable for the previous weaknesses, though they may not have been more than vaguely his fault) but of course the new coach may well be worse. In this case I expect that the change in Buffalo should improve their results by a few points. None of the other coaching changes strike me as especially substantial.

More substantial weaknesses in Edgar are the lack of accounting for age and and for quality of teammates inflating or deflating results. These weaknesses are most salient when they are combined; that is, when a team has very important players (with many minutes, playing with many other players) who are strongly affected by age (or leave the team entirely). Specifically, I worry this year that Joe Thornton's past two years of results may badly represent his output in this coming season, and San Jose will perhaps not be as clearly above the other Western conference teams as they appear.

Similarly, although not as focussed on a single player, I am concerned that Edgar's lack of age consideration will exaggerate Detroit's abilities, since many of Detroit's high-minute players are fairly old (in hockey terms).