I simulated the 2016-2017 NHL seasons a million times to estimate what is likely to happen. I used a simulation harness linked to my predictive model for single games, Cordelia. Curious readers will find lots of detail in those links, but the short version is that I consider offence and defence, shooting and goaltending results, special teams, penalties drawn and taken, rest, and home ice advantage. Injuries, suspensions, and all off-season moves are included. 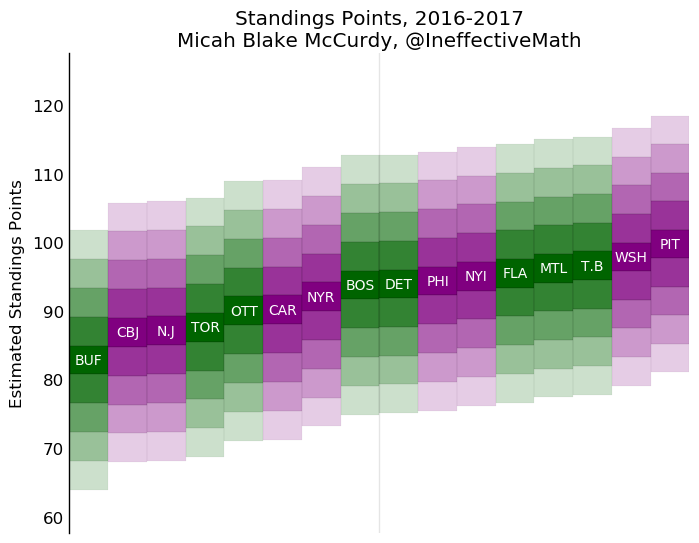 Thus, for instance, there is a 20% chance that Detroit finishes with between 92.1 and 96.3 points; the two adjacent boxes each represent a chance 17%, the next two 12% each, the next two 7% each, and the extreme pair 4% each. The darknesses of the boxes are chosen to reflect these probabilities.

Thus, we expect around six of the teams to finish in the darkest box, around ten to fall into the adjacent boxes, around seven to fall into the next pair of boxes, around four into the next pair, and one or two teams to fall into the faintest boxes. These one or two teams, which I make no attempt to predict ahead of time, will be much discussed. The proximate cause of their success or failure will doubtless be a superhuman goaltending performance, like Carey Price in 2014-2015, or a horrific cavalcade of injuries, like Columbus in 2014-2015, or an exuberance of last-minute goals and hot shooting, like Calgary in 2014-2015. Part of why I make predictive models is that I enjoy knowing just how unlikely are the various unlikely things that happen every year. 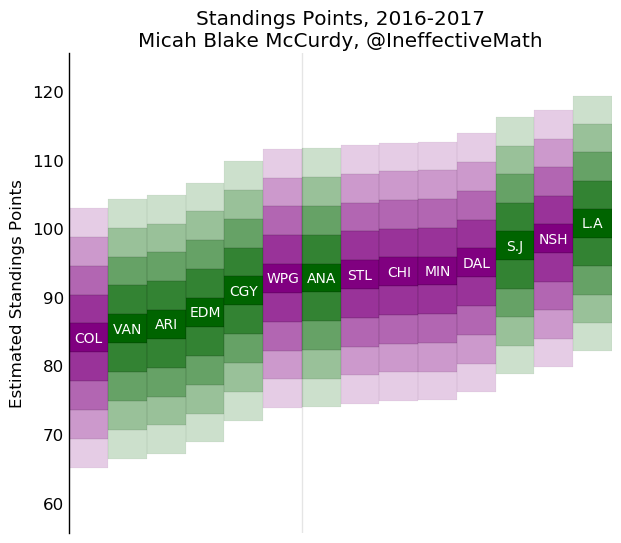 The West is tighter than the East, especially in the middle where the churn for the bubble playoffs spots is. The central teams have a decisive upper hand, though the pacific is by and large weak enough to make the Central easier to make the playoffs from than the Metropolitan. 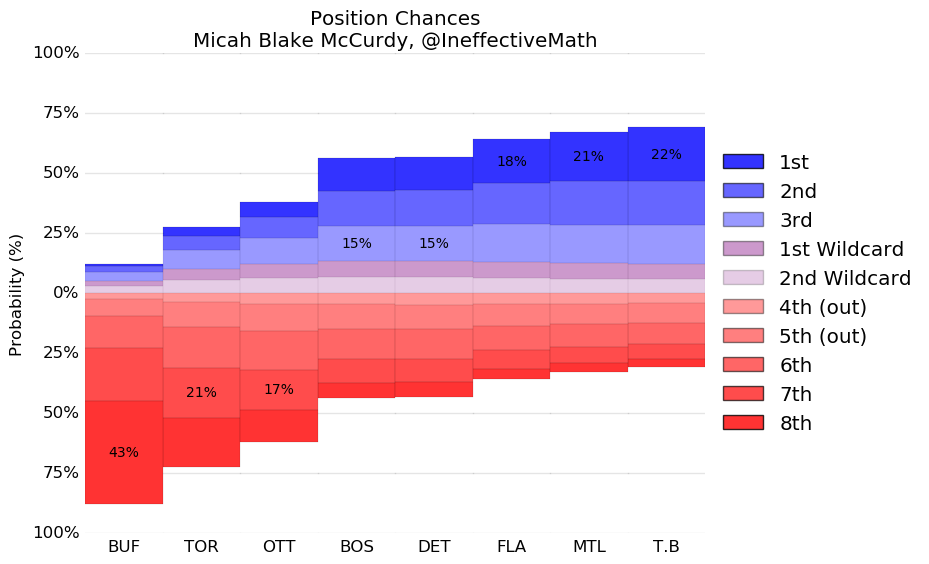 Every team's most likely finishing position is marked---all three of Florida, Montreal, and Tampa Bay are more likely to finish first in the Atlantic than in any other particular position, which is another way of seeing just how tight the division is. Buffalo will need to see considerably larger improvements from their young players than is likely if they are to make the playoffs; the same to a lesser degree is true of Toronto. 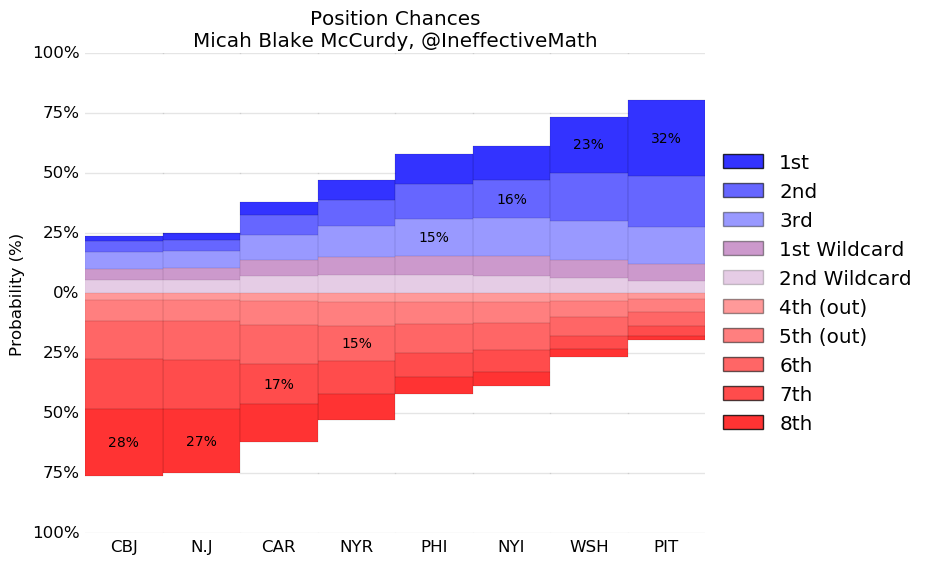 The Metropolitan division is a little more stratified, without so much bunching of teams. The Taylor Hall trade is a big improvement for New Jersey but they need a lot more pieces. The two middle teams (NYR and Philadelphia) rely more than the others on their goaltending, so there may yet be confusion there. Pittsburgh look considerably stronger than most defending cup champions, they've lost no substantial pieces. 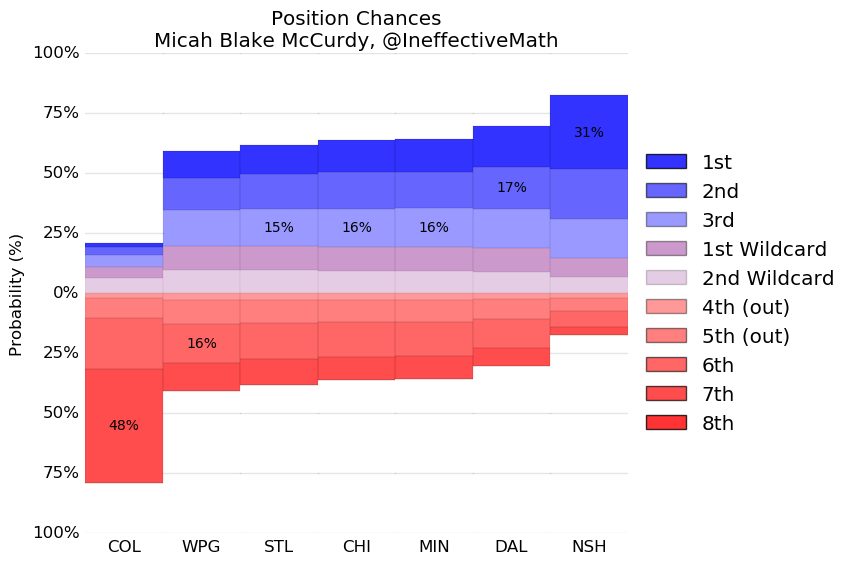 The Central is by far the tightest division in the league, with very little to choose between among the middle five teams. Colorado are the clear runt of the litter, not least because they have to play the other Central teams so much. Nashville is considerably improved by the acquisition of Subban, which moves them to favourites for the division. 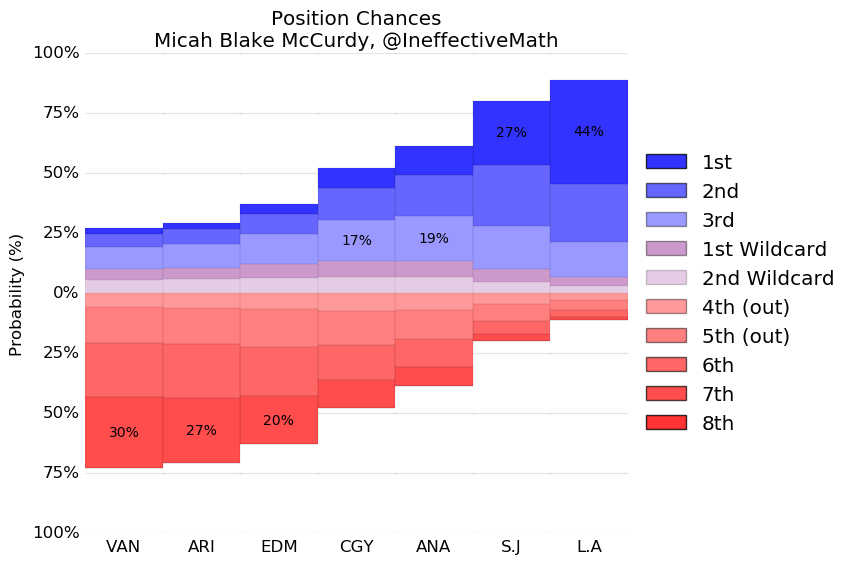 Even with clear recent improvement, the Oilers still have lots of weaknesses; Vancouver has made a number of very poor moves recently and is almost certain to be very weak; and Arizona's playoff hopes rest on several of their young players showing strengths they have not previously shown signs of. The traditional powerhouses of Los Angeles and San Jose look every bit as strong as last year. 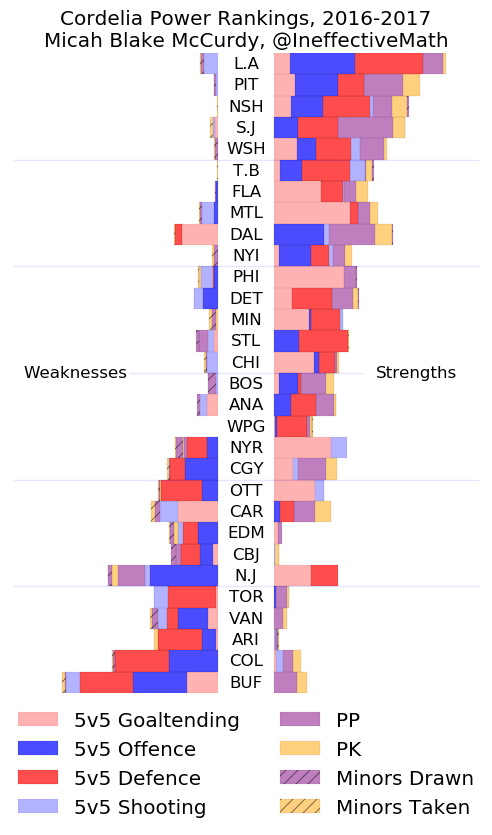 Based on their likely rosters throughout the season, the expected attributes for each team are as shown to the left. Some teams are all-around power-houses, like Los Angeles, Pittsburgh, Nashville, or San Jose, where some have many weaknesses, like Buffalo or Colorado.

Some very good teams are unusually reliant on goal-tending, most obviously Montreal and Philadelphia, both of whom would be middle of the pack without their excellent goaltending. Such high rankings are not undeserved---after all, wins from great goaltending are still wins---but they are more fragile and prone to variation, both that typical to the position and injuries, than rankings founded in other stats. Conversely, a few teams have unusually weak goaltending, such as Carolina and Dallas; they also could change considerably in strength. 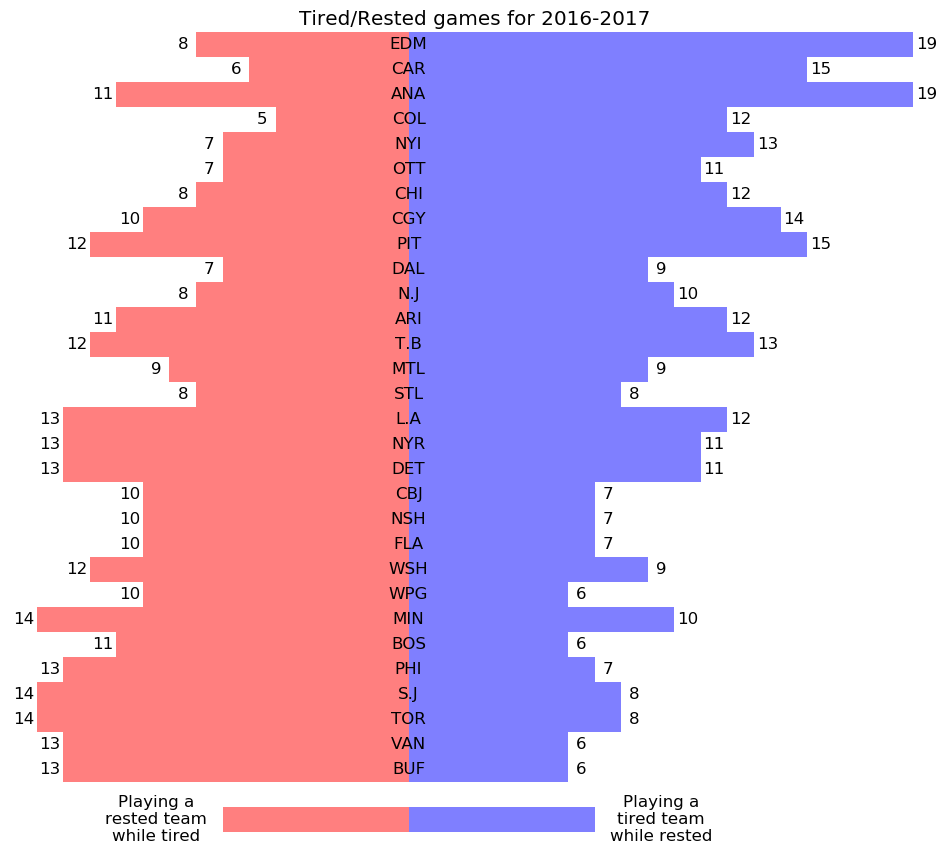 Not all teams are equally affected by rest. The strongest effects from rest are seen when teams play after playing the night before. The table below shows how many times each team plays 'tired' in this sense, as well as how many times they play against a team that is tired.

Since the league hasn't yet implemented Gold drafting, many teams will once again play many games at the end of the year which they would rather lose. Although there will be many trades and confusions between now and the end of the year, these are the early probabilities (including all three lotteries) for who will get the 2017 first overall draft pick.

By far the largest weakness in my approach that I can discern is that no attempt is made to account for coaching effects. For single players who change teams I feel that this effect is reasonably small but for teams who change coaches the effects can be substantial. Some teams (Colorado and Ottawa, noticeably) have substantially improved their coaching staffs since any NHL games were played; those teams will probably do better than listed here although I am at a loss to estimate just how much better. Some other teams (notably Anaheim) have substantially weakened their coaching staffs, they will probably do somewhat worse than projected here. Other teams have changed their coaching staffs non-trivially also though I am not sure if for the better or for the worse.

Another (related) weakness is the failure to explicitly account for any context to the individual elements that go into game predictions except for score-state. My previous work has suggested that zone deployment is largely negligible; competition deployment may or may not be negligible; and teammate deployment is certainly not negligible: none of them are explicitly included. When teammates remain together the latter fault is small (it is implicitly present in the data and preserved) but when players change teams it is larger. Thus my approach will only partially account for players who change teams. I don't see a way to tackle this without modelling the way in which two (or three, or four ...) players will affect one another's on-ice results; at the moment this simply seems like a gargantuan undertaking.

Finally, player aging is not explicitly included, so players under the age of twenty-four or so will be slightly underrated by Cordelia and players over the age of twenty-six or so will be slightly overrated. I consider only results from the past two years in part to try to detect aging effects, but teams with lots of young players will likely overperform their estimates here and teams with heavy icetime to older players vice versa.

Now that the dust has settled, how did I do? 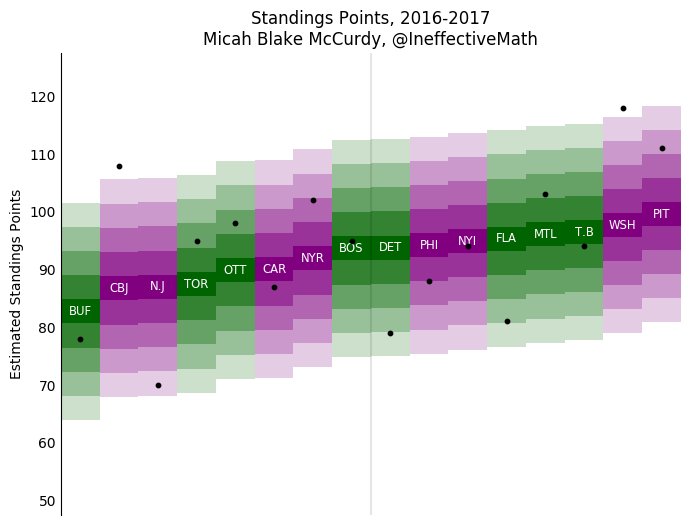 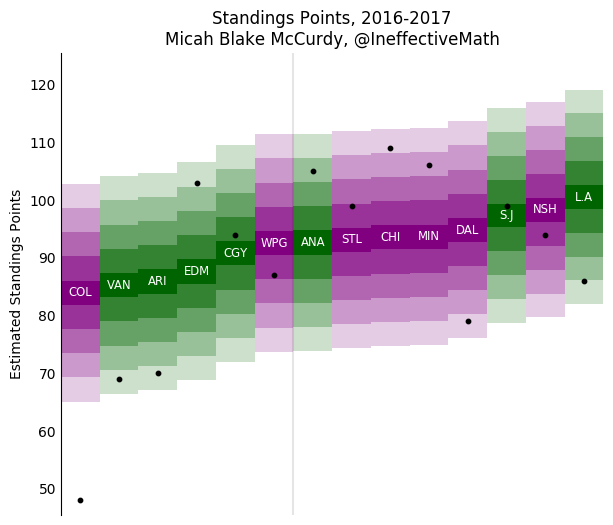