(This model, is the penalty version of Magnus 6. This explanation here is copied from there, with changes as appropriate.)

I would like to be able to isolate the individual impact of a given skater on the penalties their team draws and takes. I take the philosophy that all of the skaters on the ice are jointly "responsible" for all non-offsetting minor penalties drawn and taken, without concentrating responsibility on the person who goes to the box and feels shame.

The columns of \(X\) correspond to all of the different features that I include in the model. There are broadly, two different types of columns. Some terms occur in pairs, one for offence, one for defence:

The remaining terms apply only to the penalty-taking team:

First, we consider the effect of being the home team vs being the road team, through each period.

Unsurprisingly, the road team is more likely take penalties than the home team in every period; but both teams commit infractions considerably less in the third period. To a smaller extent, the second period is more penalty-filled than average.

We know that the score affects how teams generate and suppress shots; it also has an effect on penalty rates. 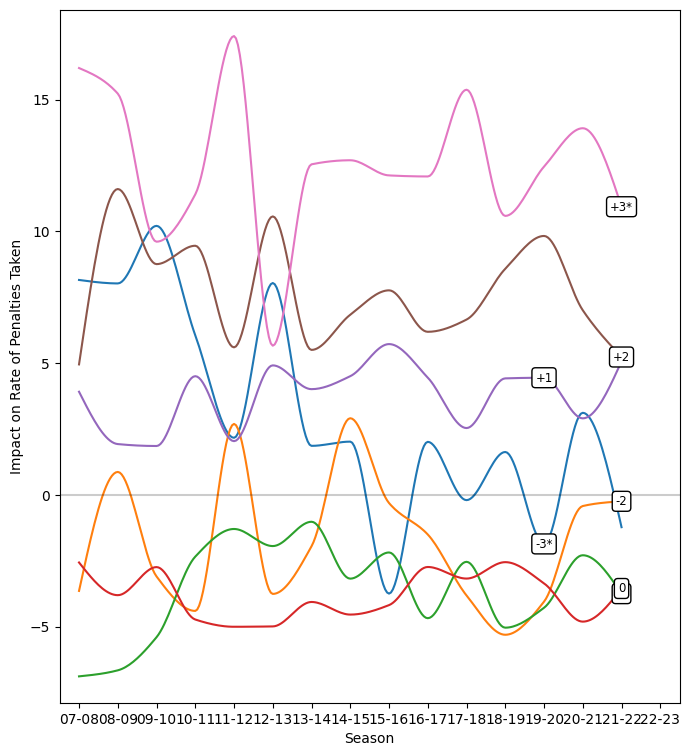 The zone in which shifts are started also affects penalty rates: 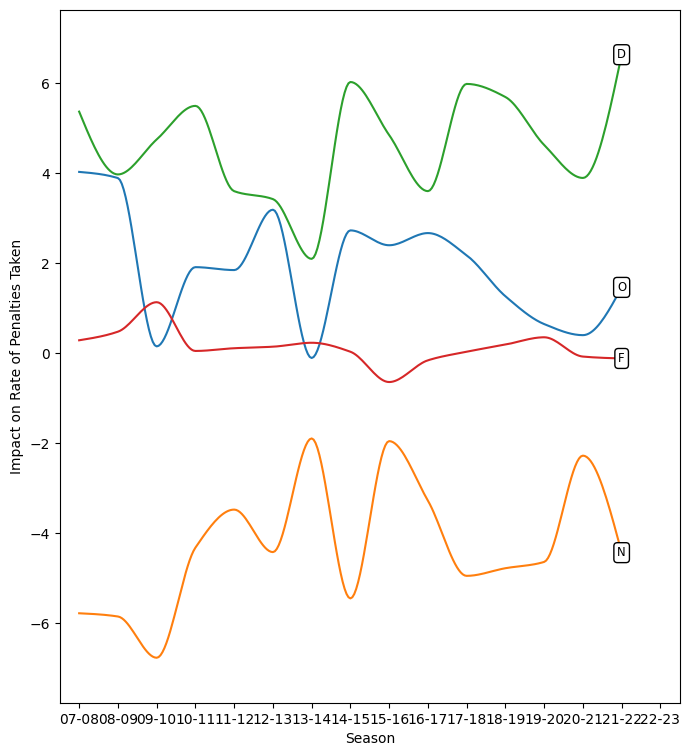 On-the-fly shifts unsurprisingly are associated with minimal change in penalty rates, as one might expect since most shifts are started on-the-fly and such shift starts occur all over the ice. Also as expected is the rise in penalties taken by teams whose players start in their own zone. Somewhat more interesting is the small rise in penalties taken by players starting the offensive zone. Neutral zone starts are associated with drops in penalty rates but the effect is smaller now than it once was.

One of the most interesting things about penalties is that they show a strong relationship among themselves within a game. The most obvious form of this is the so-called "make-up" call, where a team that commits a penalty (especially a marginal one that might just as well gone un-called, anecdotally) is frequently followed shortly by a penalty call against the other team. 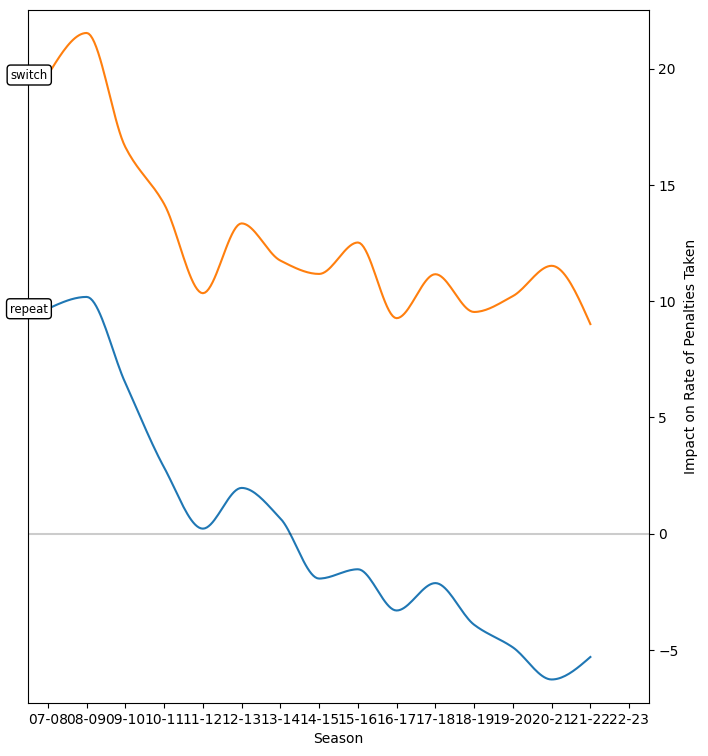 Both "switch" and "repeat" terms show a marked decline over the last fourteen years; surprisingly the difference between them (the tendency to call the "other" team for the next penalty rather than the same team again) has remained roughly constant over that whole team. This effect is the subject of a great deal of (largely deserved) complaint about the league, especially in the playoffs where it is seemingly more salient (this work is confined to the regular season, however). It is commonplace to see the effect blamed on referees, imagined (perhaps correctly) to scrutinize the "other" team more carefully than the "same" team who was recently penalized, perhaps even to the point of turning a blind eye to repeat offences. It is also possible that this effect is partially attributable to players for the recently-penalized team responding to that penalty by playing more cautiously, committing fewer "borderline" infractions. A subtle analysis that could capture one or both effects seems beyond me at this moment.