Some exposition here is copied from an older description of the lottery as it was held in 2016.

The NHL this year will use three linked lotteries to decide the draft order for the first round. Each team who does not qualify for the playoffs has a given lottery chance; if they are chosen, they pick first overall. After this, a second team is chosen, starting from the same probabilities, but modified so that the team who won the previous lottery is not eligible; this second team will pick second overall. Finally, a third lottery is held, again modifying the starting probabilities only to exclude the winners of the previous lotteries: this winner picks third overall. The remaining teams pick in reverse standings order for the first round; in later rounds the lotteries have no effect.

It is reasonably straightforward with the aid of a modern desktop computer to compute the chance of obtaining a given pick after finishing in a particular spot and I have tabulated them thusly:

Darker blue shading indicates higher probabilities, and the displayed number is the percent chance of that particular outcome. Zero and one hundred are shown in solid white and blue. The basic lottery probabilities for the draws are shown in the first column of the table.

The last place team picks no lower than fourth, and is in fact most likely to do so than to pick in any other other particular spot.

If you prefer, you can compute the chance of picking in a particular spot or better by simply adding up the figures: 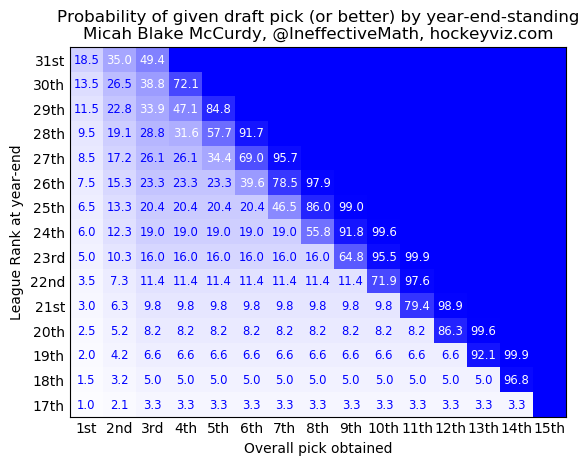 All seven of the lowest seven teams (and also Vegas) are more likely to fall at least one spot in the draft than to move up.