It's common to look at offence and defence as two sides of the same coin. If you're not pushing the puck up the ice, then it's being pushed down into your end. Our common phrases rely on this assumption often; after all, the best defence is a good offence, so we say. The obvious geographical fact that the puck can't be in both zones at once is powerfully forms our intuitions.

Our simplest and most versatile measure for quantity (if not quality) of offence and defence is shots--that is, blocks, misses, saves, and goals. Let's look at how individual skaters did at 5v5 in individual games this past year. First, a scatter plot: 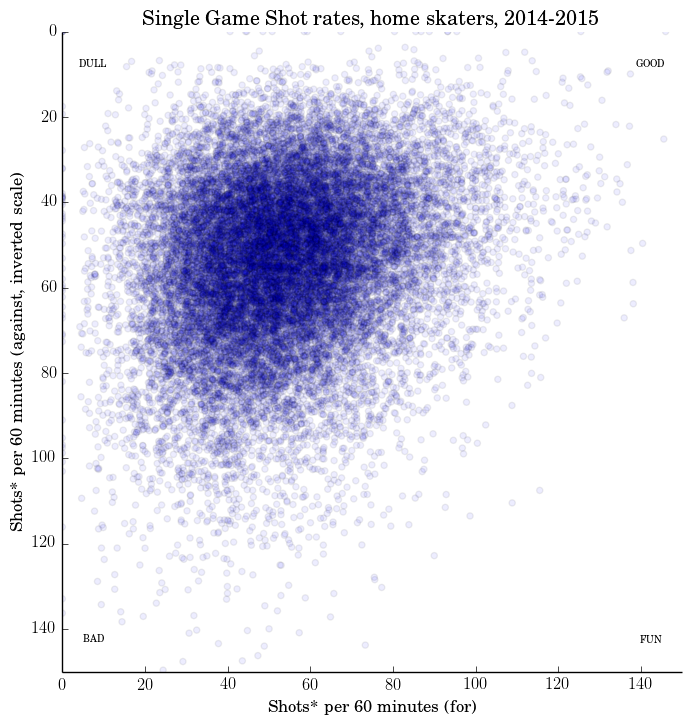 Here, each dot represents the 5v5 results of a single home skater in a single game. We restrict to home skaters because the results of the away skaters are, in aggregate, determined by the home skater results and we don't want to introduce any bias. We use score-and-venue adjusted shots, which adjusts out how home teams get more of the shots and also smoothes over some distracting striation effects that aren't interesting today. Each dot is the same colour, the dark patches are areas where there are lots of overlapping results. Even with the axes zoomed out this much, a handful of points are still cut off; even more worryingly, some of these points represent 25-30 minutes of 5v5 ice time for top-pairing defenders, and some of them represent only a handful of shifts for the likes of 13th forwards.

To account for this, I made a kernel density estimate of the data. It is much easier to look at and not nearly as complicated as it sounds at first. Notice also that we've zoomed our axes in a little bit. 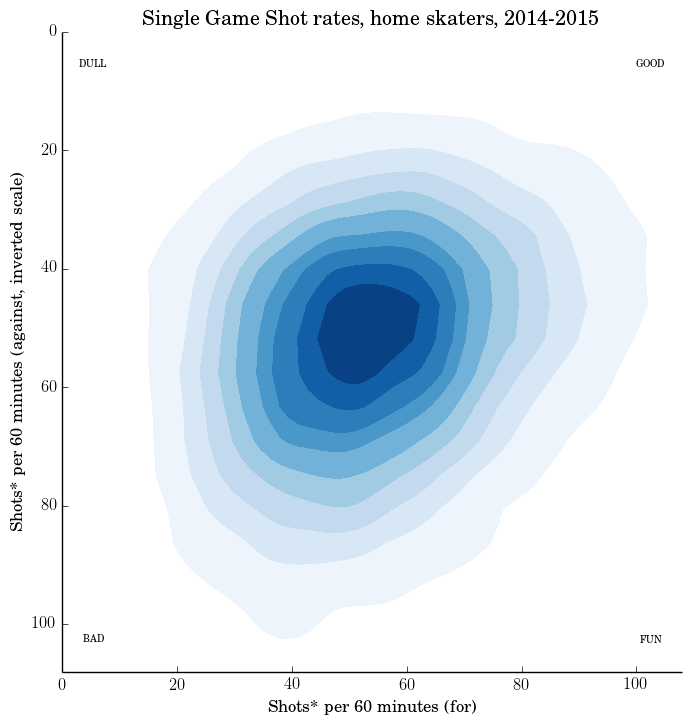 The idea behind the graph is this: for every point in the scatter plot, imagine dropping a little clump of sand at the indicated point. Points representing 25 minutes of 5v5 play get 25 grams of sand, points representing 3 minutes of 5v5 play get 3 grams. As the sand hits the plot it slides off in all directions, but the little pile is tallest at the point in question. As the thousands of piles of sand fall on top of one another, a mountain-shaped sand-castle emerges, and we can make a contour plot of where the sand is. The above chart shows deciles (tenths) of icetime: if you imagine slicing the sand-mountain horizontally like a layer cake so that each layer has a tenth of the total, then each layer gets a different shade of blue. The little piles of sand are called "kernels" because they are little things that grow up into a full picture; and in fact they are standard gaussians for those who want all the details. I am very fond of these kernel density pictures, so I explain this one in some detail.

The most striking thing about this picture of single game shot results is how un-striking it is---the point of this post is how the dog doesn't bark. If shot generation (the x axis) and shot suppression (the y-axis) were two sides of the same coin, we'd expect to see a distribution that tracked more tightly from "BAD" to "GOOD" without as much sand/blue colour/on-ice results out by "DULL" or "FUN". The (weighted) correlation is -0.26, which is negative, as intuition suggests, although still fairly small. For visual comparison, the plot below is what this measurement would look like if shot generation and suppression were completely uncorrelated: 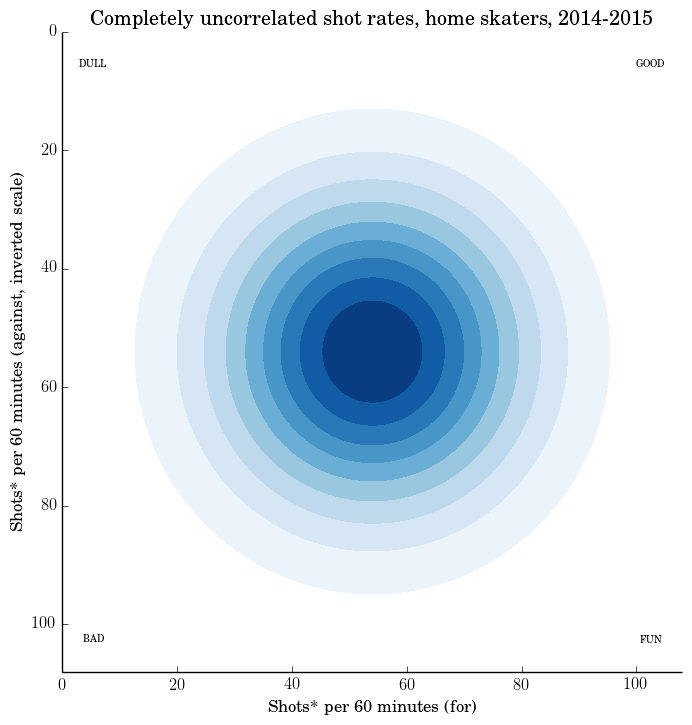 The difference, as you can compare by eye, is that there isn't quite as much really "FUN" hockey as you would expect if shot generation and suppression were totally independent. This suggests that the effective "hockey" upper-limit for NHL hockey is around 160 shots per sixty minutes, or about one shot every 22.5 seconds. This is still quite a bit longer than the physical upper limit of how long it takes to get the puck from one end of the ice to the other, by about a factor of five or six, so that gives you some indication of just how much of the game is played in the contest to get the puck up the ice, into a position where you can shoot the puck.

Incidentally, this last fact is part of why shot totals are essentially impossible to game. By the time you've won a faceoff, recovered a lost faceoff, taken a few hits, eventually won a sequence of puck battles, made a set of good passes, kept structure on the breakout, moved with speed through the neutral zone, gained the zone with control, successfully forechecked to recover the puck you dumped in, sealed the the boards to prevent the breakout, found a teammate open in a spot worth shooting from, and got the puck there---by the time you've done all the things, as a team, that permit a shot of any kind---you've done the enormous bulk of what shot-measures measure. You can game the last few steps, perhaps, but it won't move the needle any.