How to read With-or-Without-You Diagrams

Individual player WOWY diagrams are quite complicated but show a lot of detailed information. Here, for instance, is Cody Ceci's WOWY for 2014-2015. 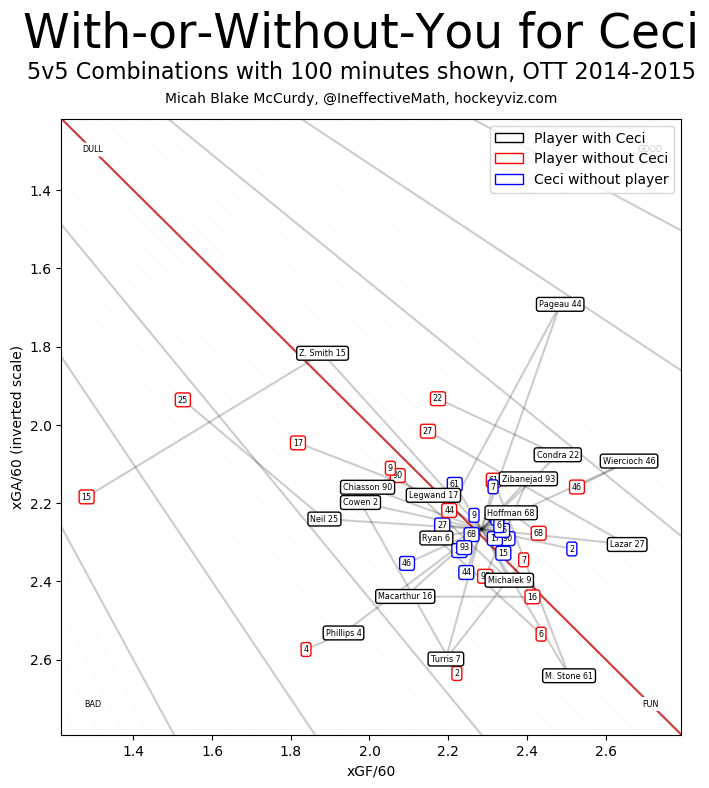 The diagram shows every player with whom Ceci played at least 100 minutes at 5v5. The legend lists all these players, with their jersey numbers, and the number of minutes each one played with Ceci and without Ceci. For instance, Ceci played 295 minutes at 5v5 with number 7, Kyle Turris, and Turris played 868 minutes without Ceci. Together they played a very up-tempo style; they are shown in a black box marked "7" at the bottom-right of the diagram, towards the corner marked "fun". Turris away from Ceci is shown in a red-boxed 7, and Ceci away from Turris is shown in a blue-boxed 7. All of the boxes are numbered with the other player, but every point refers to Ceci---this is, after all, Ceci's chart. Both players had dramatically lower event rates when separated than when together, although in percentage terms the difference is modest. This is a fine example of why I shun percentages--they might easily be used here to conclude that Turris and Ceci have a small effect on one another, which we see is badly mistaken.

Some players show a "defensive chemistry" with Ceci, for instance, his results with Jean-Gabriel Pageau are shown by the black "44" box at the top-centre of the chart, is considerably stronger at shot suppression than either of the two players when separated. Some pairings have the opposite effect, for instance, with Chris Phillips there appears to be a large "defensive antichemistry", to coin an awkward phrase.