How to read Player Cards

Thank you to Danny Page and Megan Richardson for visual editing and advice.

Each diagram shows a set of key statistics about a player's performance over the past three seasons. They gather summaries of individual scoring, penalty, on-ice shot and goal results, together with score, zone, and skater deployment context. 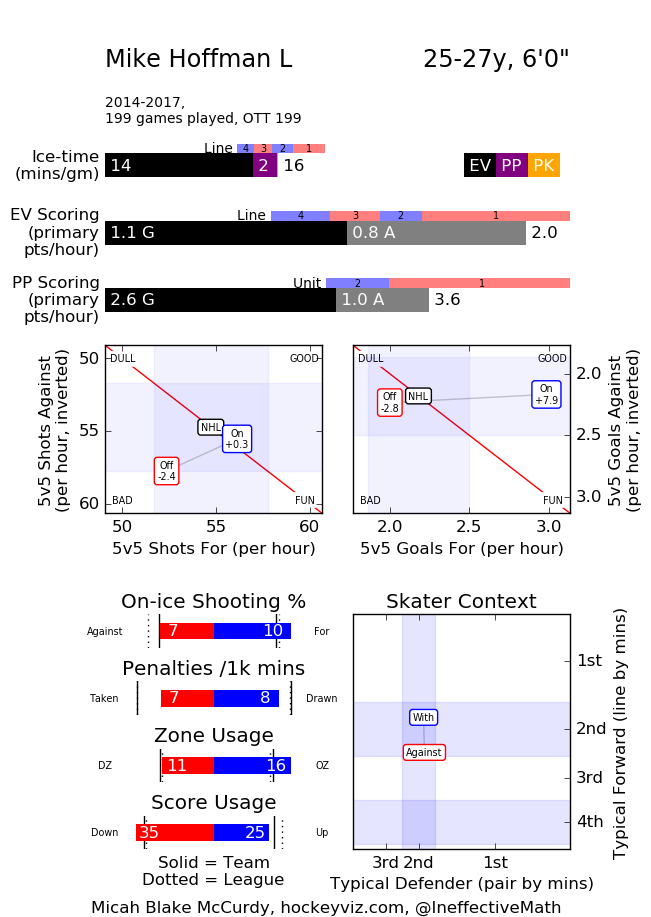 This chart belongs to Mike Hoffman, his name, official NHL position, and ages during the three seasons in question are displayed first. The official positions are often wonky; in particular, many players are listed as centres even after playing wing for years. The number of games played is shown below the name, Hoffman played 25, 79, and 78 games for a total of 182 games, all with Ottawa.

The next bar is the Ice-time bar: Hoffman played just over 13 minutes per game at even-strength, and just over 2 minutes per game on the powerplay, with a tiny sliver of penalty killing minutes, totalling in all just under 16 minutes per game; because of rounding to the nearest minute the overall number is not always the sum of the displayed numbers for the sub-situations. The "Line" indicator above his minutes show the distribution of the top 90 forwards (the "first liners" of the league) over the past three seasons, marked "1", then the next 90 forwards by total ice time, marked "2", and so on. Hoffman's bar reaches to the top of the "3" bar which means his minutes were, compared to the whole league, third-line minutes, almost second-line minutes.

The third bar is Power-play Scoring, which is measured in primary points per hour of power-play time. It's not on the same scale as the second bar, since power-play points are much easier to come by than even-strength points. Here Hoffman's 2.5 primary points per hour is not nearly as impressive, only barely reaching the level of "second unit power-play", as measured from the entire league over the last three years.

The Penalties drawn and taken are listed per 1,000 minutes of all-situations ice-time. Hoffman takes about five and draws just over nine. The league average is just below ten, shown in the box marked 'NHL'. 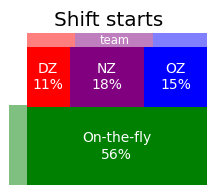 The brightly-coloured segment toward the bottom-left shows Shift Starts. Like most players, Hoffman started most of his shifts on-the-fly, the faint green bar to the left shows the proportion for his teams in the games in which he dressed; Hoffman started very slightly more of his shifts with faceoffs. The shifts which started with faceoffs are shown in the row along the top, with team comparisons in pale bars; here Hoffman had slightly more offensive-zone deployment and slightly less defensive-zone deployment than his teammates. Note that Hoffman was on the ice for many faceoffs in many zones which were not shift starts for him, those faceoffs are not considered here.

The Score Deployment segment at the very bottom-left shows the proportion of the time that Hoffman played while his team was trailing (red), tied (purple), or leading (blue). The faint bars above show the average state for Hoffman's teams, and those below show the state for the league as a whole during the past three seasons. We see here that Hoffman was preferentially deployed when the Senators were losing instead of when they were leading. 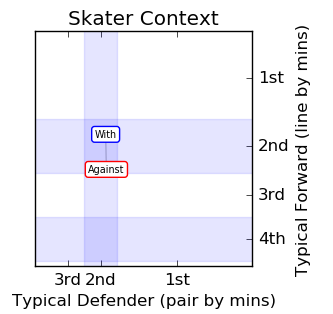 The blue-and-red bars in the bottom-right show roughly the Teammate and Opponent Skater Quality that Hoffman shared the ice with. The top two sets of bars show forwards, arranged by line; the lower two sets show defenders arranged by pairing. The two left-hand sets show teammates, the two right-hand sets show competition. The red lines show league average times, and players on higher lines play more than those on lower lines, so the typical player sees more of the top lines even if his coach makes no effort to match him against them. Hoffman's competition has been virtually identical to league average over the past three seasons; a tiny bit more 3rd line opposition and a scrap less third-pair is the only deviation. The red bars show Hoffman's usage, he played substantial minutes on the top three lines, with a small but non-trivial amount of time spent playing fourth-line minutes. His "forward teammate" bars are obviously much shorter than league average, because he usually only plays with two forwards at a time.