How to read Shot Maps

The most basic unit of offence in hockey is the shot and so I have made a great many charts showing how efficiently teams generate shots in a wide variety of situations. For the purposes of making shot maps, I use "shot" to mean any unblocked shot; that is, a shot which is missed, saved, or scored. If I had access to shot location data for blocked shots I would almost certainly include them also, but I do not. 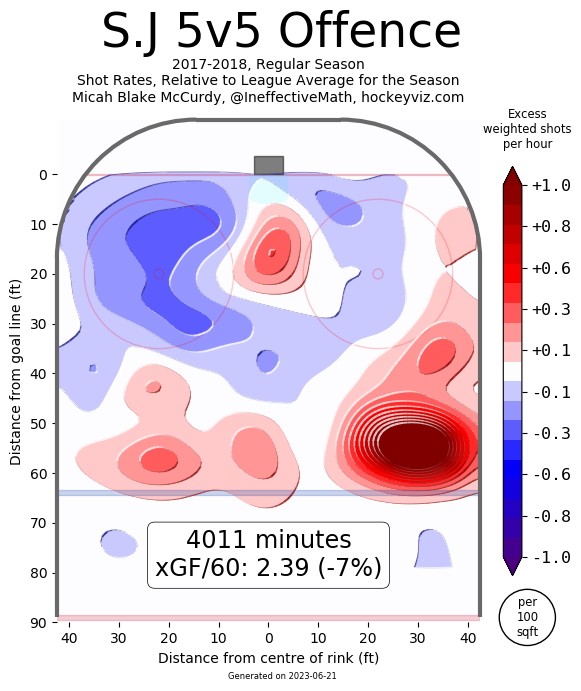 The most basic version shows where a team generates shots from, like San Jose in 2017-2018. Charts like this, with the net at the top, show offence, that is, this is shots taken by the Sharks. Since every team shoots primarily from close to the net and the points, charts that show absolute rates of shots are not very interesting. Therefore, I compute how much more often (or less often) a team shoots from a given spot than an NHL average team in that same season. For 5v5 play, like the above chart: The Sharks offence that season was above-average, driven by an ability to generate lots of shots in front of the net and in the slot (the central red blob) and also by their right-defenders, especially Brent Burns, shooting from the right point (the other red blob). The other regions of the ice were comparatively underused, although the pale blue colour shows they did shoot from those regions, slightly less often than the average team did.

On the one hand, the Sharks had one of that season's better 5v5, offenses but in fact the number of excess shots is not very many. For instance, the red area in the slot is perhaps around 200 square feet (notice the reference circle for area in the bottom right) and so the excess shots from that area is about one per hour of 5v5 play. Such an advantage is non-trivial, of course, since such shots are dangerous, but one must also keep in mind that the spread of performance results in the NHL is quite small.

Because some of the later charts can be based on relatively few minutes, I decorate every shot map with the number of minutes shown; for a team in a full season the number is very large. For maps like this, the natural unit of measurement is the rate of shots. However, as we know, not every shot from a given location is equally dangerous, even before we arrive at the question of how talented the shooter or the goalie may be. Any number of factors may affect the danger of a shot, like the shot type, if it was or was not a rebound or on the rush, and so on. Carefully weighting these factors results in an "expected goal" probability for every shot; I have created such an expected goal model, described here. However, these non-location factors are not so easy to display in a simple two-dimensional map. To accomplish this, I have created another expected goals model, without these non-location factors; including only the skater strength state and the shot location. I call this "simplified" expected goals model "xG0". For every shot, I compute the xG and also the xG0 and compute their ratio. A relatively dangerous shot from a given location (a rebound, say) will have a high ratio (perhaps as high as 1.5 or so), and a relatively less dangerous shot from the same location will have a lower ratio, perhaps as low as 0.7 or thereabouts. I use these ratios to weight the shots in the map, so that teams who consistently take fewer but more dangerous shots can be properly compared with teams that take more but less dangerous shots. 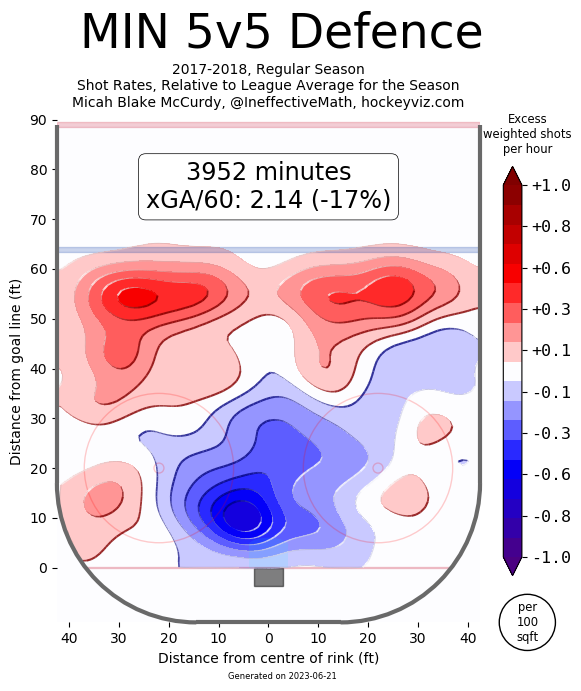 Charts like this, with the net at the bottom, show defence, that is, this is shots taken by the opponent of Minnesota in 2017-2018. Here, just as before, red means "more than average", and blue means "less than average", so the large blue regions close to the net show Minnesota's excellent 5v5 team defence in this season. 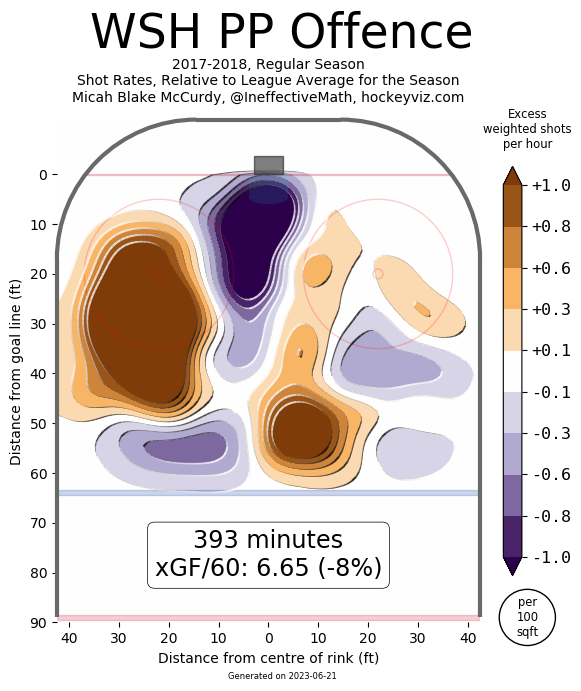 In this example, Washington's extremely Ovechkin-dependent powerplay from 2017-2018 shows a heavy asymmetry, with a big hotspot from his usual "spot". Crucially, the expected goal values are computed assuming league average shooting and goaltending talent. The xG value here of 6.48, a little worse than league average. In point of fact very nearly all of the shots in the left-circle blob are taken by Ovechkin himself, one of the best shooters in the league, which explains why the Washington observed goal rates considerably exceed the computed xG. 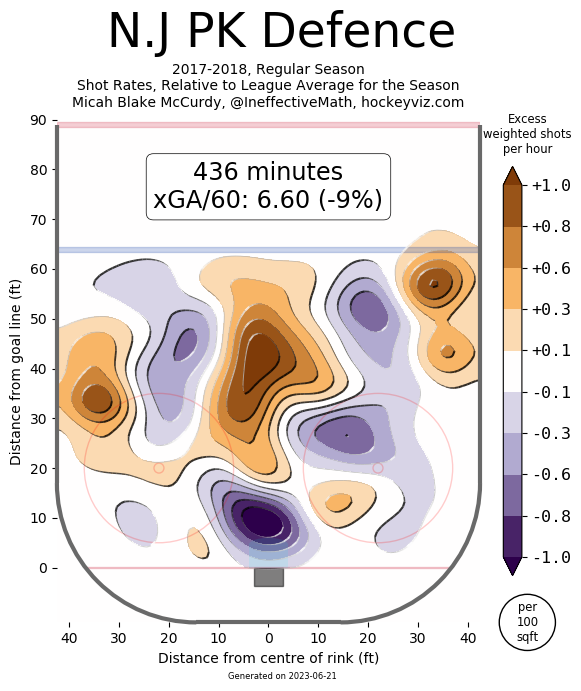 Finally, I also make charts for the shots allowed by a team while short-handed, with the same colourscheme as the power-play offence charts above: orange for "more than average", purple for "less than average". Here, New Jersey's penalty-kill from 2017-2018 allowed fewer shots than the league-average penalty-kill did from immediately in front of their net, with a small increase in shots in the high slot.