How to read Quality of Other Teammates and Competition diagrams

Each diagram shows the distribution of teammates and competition that shared the ice with a given player in the course of a season. 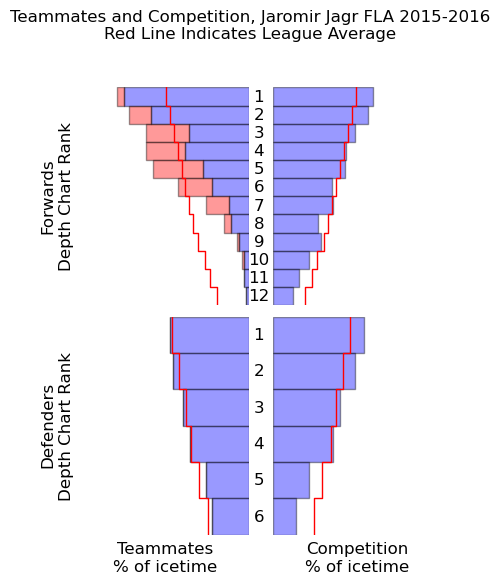 This diagram is for Jaromir Jagr's 2015-2016 season with Florida. The two diagrams on the left are for Jagr's Florida teammates and the two on the right are for his opponents on various other teams. For every game, I made a depth chart for that game, ranked by total (all-situations) ice-time in that game. So if Jagr played 10 minutes against whoever was the minute-leading forward on that night for his opponent, that 10 minutes get put in the bin for "#1F competition", the bar at the top of the top right graph. Once all of the time is added up, I divide by the total number of minutes so all of the bars are percentages of total time. Top players get more icetime, though, so if a coach paid no attention to who else was on the ice, a player would still see more high competition (and more high teammates) than low -- this league average is shown with the red step function. The bars in the top right are a little longer than the league average, that says that Jagr played a larger share of his minutes against top line competition than you'd expect from a player with average usage. The bars are slightly shorter for the 7-12 forward positions than the league averages, so Jagr saw less bottom-six forward competition than you'd expect.

Jagr's own icetime is shown in red; he was deployed heavily at 3rd/4th/5th, but also a little at 2nd/6th/7th and a scrap at 1st and 8th. His linemates were frequently top liners on those nights, but also a fair bit with second liners, and basically never with fourth liners.

The defender bars are twice as wide as the forward bars because there as half as many defenders dressed as forwards, that way differences between defence competition and teammates get exaggerated on the chart the same way they're exaggerated on the ice. Here Jagr faced a little more top pair than you'd expect and a little less of the bottom pair. The pattern for the defenders on his own team is the same but much closer to average, as it typical---substantial correlations for teammates across positions is fairly uncommon.