How to read Matchup Diagrams

The matchup diagrams show, in condensed form, what happened at 5v5 when two given players were playing against one another. The diagram below is from a game of the Predators at Islanders on October 15th 2015. 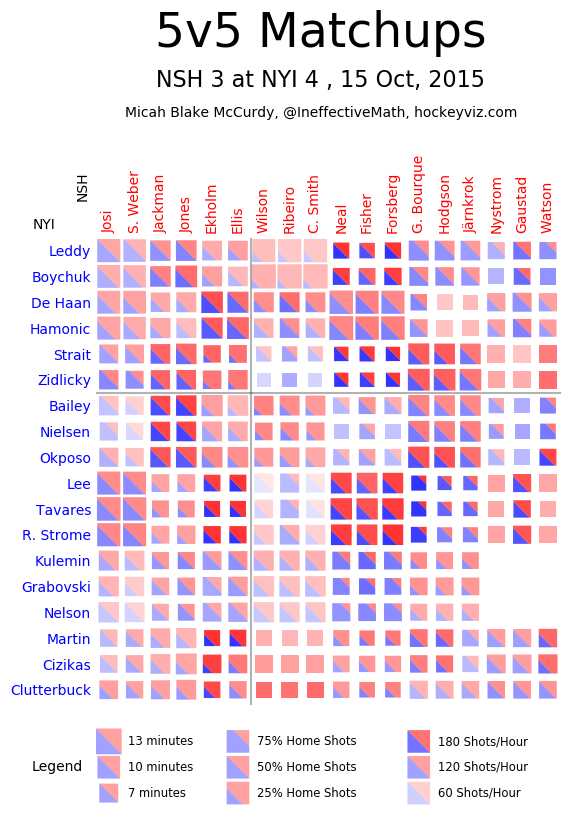 The home team players are listed vertically along the y-axis, the away players horizontally on the x-axis. First the defenders are listed, in decreasing order of 5v5 icetime, and then the forwards are listed, also in decreasing order of 5v5 icetime. Every pair of players has an associated square. The size of the square indicates the amount of 5v5 time the given pair played against one another, for instance, the Islanders second pair (Boychuk-Leddy) saw a great deal of icetime against the Predators first line (Ribeiro-Smith-Wilson). On the other hand, the Islanders third line (Grabovski-Nelson-Kulemin) saw no time at all against the Predators fourth line, so there are no boxes there.

The colour of the box indicates the shot share during the shared icetime. Home shots are shown in blue and away shots are shown in red; the players are written in these colours also. For instance, when both Roman Josi and Nick Leddy were on the ice, the box is split evenly in blue and red, indicating that half of the shots were obtained by each team. On the other hand, the Boychuk-Leddy pairing were heavily dominated by the Ribeiro-Smith-Wilson line, and those six boxes are heavily red, indicating that Nashville had the bulk of the shots when those players were on the ice at the same time.

The darkness of the colour in the box indicates the density of shots in the shared ice-time. Darker boxes had more shots in them, fainter boxes had fewer. Most of the boxes for James Neal and Filip Forsberg are quite dark, indicating a fast-paced style of play when those players are playing. Conversely, some boxes are very faint. For instance, The Islanders got all of the shots when Marek Zidlicky was on the ice against the Ribeiro-Smith-Wilson line (since those boxes are solid blue) but there wasn't much of this time (the boxes are small) and there weren't very many shots in this time in any case (the boxes are quite faint).