How to read Isolated Impact Charts

For instance, this chart is for Hampus Lindholm, the Anaheim defender, as of April 19th, 2020. The point of the isolated impact charts is to summarize the ability of the player in question to impact various aspects of a hockey game, at a specific instant in time. 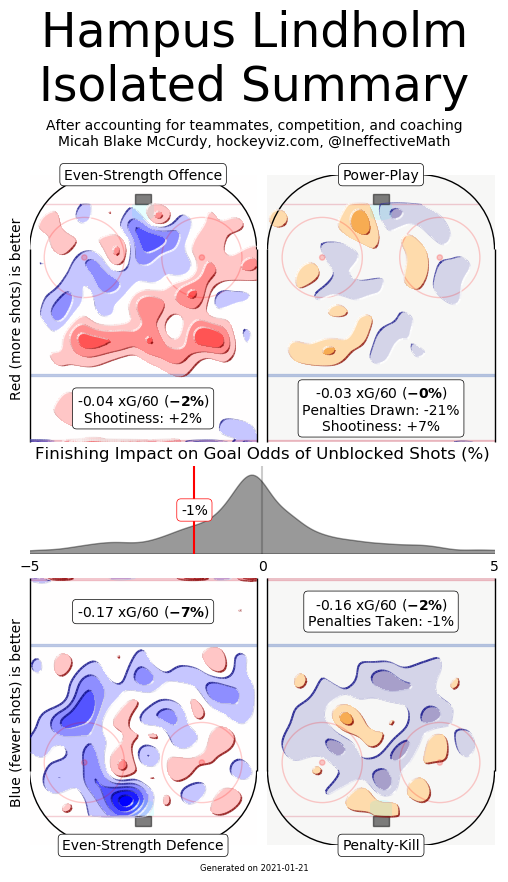 I run several different regressions to estimate player ability: one for impact on shot rates at 5v5, one for special teams shot rates, another for shooting ability, and another for impact on minor penalty rates. The graph shows the outputs of these models for a specific player, as well as one plain (unregressed) measurement of shoot-first tendancy ("shootiness") which I feel is reasonably "individual".

The most important way a skater can affect the results of games is by moving the puck into the offensive zone where they or one of their teammates might score. Therefore, this impact is what gets the most important place in the viz, in the top left. Red areas show where the given player causes shots to be taken at a larger rate than league average, blue areas less. I have also written a detailed explanation of these shot rate maps, which I use often for many purposes. For offence, more shots (red) is good. Lindholm here is a little weaker than league average; his presence is associated with more shots being taken from high in the zone and fewer from the slot. Most of these shots are not taken by him personally.

Similarly, the impact the given player has on their team's defence is shown in the bottom-left. Just as above, red means more shots while blue means fewer, so a good defensive player will be mostly blue, especially in dangerous areas. Here Lindholm shows strongly (particularly on "his" side, the left), which is especially interesting since he plays on a very weak defensive team and his team's raw "on-ice" results with him look quite different. You can read a full description of the model from which these results are obtained, but the short version is that I account for teammates, competition, the prevailing score, and the zones of the ice the coach chooses for the player to begin their shifts in.

A similar model for special teams allows me to compute how each individual player contributes to their teams shot rates on the power-play, this is shown in the top-right. This is not as important as 5v5 play, since so many fewer goals are scored at 5v4, and the model operates on fewer minutes of data and somewhat more tenuously follows its assumptions. Here, orange means more and purple means fewer. Players who played few recent power-play minutes will have estimates very close to average; as do many players who have substantial power-play time.

The same model which generates power-play ability estimates also outputs penalty-kill estimates, as it must since it takes quality of competition into account. This is displayed in the bottom-right, where again purple means fewer and orange means more. Here, Lindholm's impact is decent, lowering the danger and frequency of the shots his team allows.

Finally, I also record some simpler results that do not need a rink to be displayed.